Six years ago, after playing hooky from work on a Friday to watch the Best Golfer in the World play nine holes at Riviera Country Club, I wrote this about him for my company’s blog:

Tiger hit one shot that I will remember for a long time, one of the best I’ve ever seen: 220 yards from the green after an errant drive, out of deep rough, he hit a high draw inches to the right of a big tree 10 yards in front of him, inches to the left of two bigger trees 30 yards farther up, a couple of feet over a bunker fronting the green, to within 10 feet of the pin. People in the gallery ooohed and aaahed and applauded, then gathered around the divot he made in the rough like so many TV cops peering down at a murder victim. "Look at how long it is," they muttered of the divot. "Look how wide he took his swing path." "Did you see how hard he went down after it? Damn!"

His focus is the most intimidating thing about his game. There is an unshakeable calmness to him that you don’t see in the other pros. Earl named him well, because he plays golf like a big cat stalking its prey. The confidence he has in the inevitability of his success is absolute.

And yet … and yet … it’s strange to stand near another human being and not sense any more humanity in him than you would in a thoroughbred in the paddock at Santa Anita. What makes us vital — all that brawling, longing, laughing, crying, hurting and loving — all that bitching and moaning and mucking around most of us do on a daily basis — is bad for a person’s golf game. And so none of it seems to be part of Tiger’s makeup. He is, on the golf course anyway, inhuman. 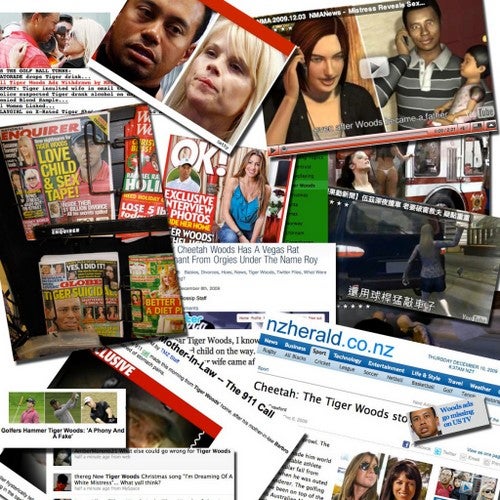 Today, the Eldrick "Tiger" Woods story, scripted for him by his father, Earl, since before he was born, is falling apart quicker than a 20-handicapper’s swing on the back nine of the club championship.

In two weeks, Tiger has gone from paragon to pariah, and has proved beyond a shadow of a doubt that a brand can no longer script the humanity out of its narrative and expect the world to play along.

In the billion-channel cosmos of the Networked World, sooner or later reality will outflank any brand’s ability to script and control its story the way brands could when there were three TV networks and a couple of major newspapers to be reckoned with, and story material was limited to what happened inside the ropes at Riviera.

As this is written, the Tiger Woods brand burns out of control like a California wildfire, and embers from Tiger’s Inferno have landed on the roofs of Nike, Gatorade, Gillette and Accenture, and they’re in flames, too. Buick’s house of straw (Did anybody ever really believe Tiger drove a Buick?) is probably burned beyond salvaging.

What’s fueling this fire isn’t the commonplace tabloid fodder of marital infidelity; it’s not about whether you side with a justly aggrieved wife or forgive a superstar his transgressions. This story is much bigger than that. It is a story as old as Achilles, the story of a hero’s fall from grace.

It’s in our nature to want to see a story completed. Tiger’s story will hold the audience’s attention at least until the downfall is assured, the disgrace complete.

The light at the end of Tiger’s tunnel — and the hope for any brand that has lost its way — is that the journey does not have to end with the fall from grace.

It may be impossible for the audience to turn away from a tragedy, but what the audience turns to of its own volition, and embraces more fervently than anything, is the hero’s return.

As Joseph Campbell chronicles in his book "The Hero With a Thousand Faces," "falling to the Temptress(es)" is one of many twists in the journey toward true heroism.

Tiger Woods can redeem himself in the eyes of his audience, but he’s got to want to be an authentic hero, not one playing a role that has been scripted for him.

The Networked World Defies the Script

Here are five productive moves he (or any other burning brand) can make in that direction:

For you non-golfers, a lie is unplayable when the ball is in a position where not even Tiger Woods can take a productive swing at it. At that point, you’ve just got to accept the penalty and play on.

This is the situation in which Tiger finds himself today. There is no excuse that will satisfy. No spin that can put the scandal to rest. He’s got no swing at this one. He’s got to cop to being a pig and a dog and apologize with more than words for whatever hurt his family, and get on with whatever’s next.

Too many brands waste time talking about how or whether to play the unplayable lie, instead of quickly agreeing that it’s unplayable. They will consult with caddies and seek rulings from judges. They will pull different clubs out of the bag. They will check the wind. They will roll up their pants legs and walk into the hazard. Sometimes, they will even go all Van De Velde (for you golf fans) and take a stupid swing at the ball and make things much, much worse. And all along, the best thing would have been to simply accept the penalty and play on.

I always thought Tiger missed an opportunity when he signed with Nike for so much of his gear.

Nothing against signing with Nike for the clubs, shoes and whatever, but giving them the clothing line, too, turned him into their mannequin.

Nike dresses Woods like a second grader in a private school. His golf clothes are billboards with swooshes. He could be wearing clothes designed by people like Bill Johnson’s Transient label in D.C., or eco-friendly brands like Nau or Vital Hemptations.

Small businesses of all kinds need help these days, and Tiger is just the guy to give it to them. He can help take a small minority-owned solar energy company national. He can sign with up-and-coming companies as sponsors, and not charge them a dime, instead owning equity in them.

This will have the added benefit of re-energizing the fan base, as pulling for Tiger will mean that you are pulling for a host of deserving upstart companies, too. The hero’s journey requires allies along the way.

Tiger has made a big deal about being what the brand calls "Cablinasian," or Caucasian-Black-Indian-Asian. OK, cool.

But the scripted Tiger explores only a very narrow strand of that — the strand that is privileged, plays a lot of golf, owns a yacht and apparently hits on any female carrying a cocktail tray.

All brands can tap creative energy by exploring their multiculturalism. Tiger’s ethnic makeup is one thing besides being a great golfer that can differentiate the brand, but he has to show the audience what Cablinasian means beyond the clever cosmetic of a made-up word.

4. Be a supporting player for a change.

From the time he was born, Tiger Woods has seldom been in a scene in which he was not the star.

His father basically abandoned his other children to focus on young Eldrick.

That is a pretty lonely path. He needs to focus on sharing the narrative with others for a while.

This does not mean going into hiding. It means consciously taking a back seat in someone else’s scene. Raise your children. Work with your charities. Find a protégé to coach. In the Networked World, we are measured every bit as much by what we contribute to others as by what we amass for ourselves. No brand is an island.

5. Get better at something you’re bad at.

We all develop go-to moves. If you are good at something, and receive a ton of approval and money for doing it, what is your motivation for doing anything else?

Here is your motivation: In the Networked World, the narrative is not only multichannel, it is multidimensional.

Relying on your go-to move has the effect of limiting your brand’s value, because it limits the dimensions of the brand that have the potential to improve and grow.

When you have won the Masters by 12 strokes and the U.S. Open by 15 and are probably the Greatest Golfer Who Ever Lived, golf is not an area of growth. It is a flat line at best.

The growth areas are the dimensions of the brand that have not yet been explored.

For Tiger Woods, this could probably mean just about anything other than playing golf and getting girls’ numbers. What does it mean to you?