Brass Against singer Sophia Urista has apologized for peeing on a fan during a concert in Daytona Beach last Thursday in a statement that comes five days after the band addressed Urista’s actions in a regret-filled tweet.

“Hey everyone. I want to speak to my performance at Rockville metal festival in Daytona,” Urista wrote in an Instagram post Tuesday. “I have always pushed the limited in music and on stage. That night, I pushed the limites too far. I love my family, the band, and the fans more than anything and I know that some were hurt or offended by what I did. I apologize to them and want them to know that I didn’t mean to hurt them. I am not a shock artist. I always want to put the music first. I’m grateful for all of your continued love and support.”

See Urista’s statement at the bottom of this post. 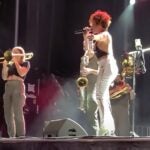 Brass Against, a band known for performing brass versions of rock songs, issued a short statement last Friday on lead singer Urista’s actions at the Welcome to Rockville concert in Daytona Beach the day before, when Urista pulled down her pants on stage and peed on a (surprisingly willing) fan midsong.

“We had a great time last night at Welcome to Rockville. Sophia got carried away,” the band’s tweet read. “That’s not something the rest of us expected, and it’s not something you’ll see again at our shows. Thanks for bringing it last night, Daytona.”

During the performance, Urista grabbed a bottle of water, and said that the show would be closed out with her relieving herself on someone in the audience once she drank it all.

“Get my man with the can on his head ready, ’cause we’re going to bring him onstage and I’ma piss in this motherf—er’s mouth,” she said.

A few minutes later, the man climbed onto the stage, with an apparently empty can attached to his forehead. He lay down on his back on the stage. Urista straddled the fan’s head, pulled down her pants, and peed into the can.

When she finished, the man threw some of the urine that had been sprayed onto the stage by Urista into the audience. After getting her pants pulled back up, Urista walked back over to the man, telling him to get off the stage and calling for security to help her out.

Also Read:
‘Riverdale’ Creator Says More Characters Will Die in ‘Rivervale’ Event After Bloody Premiere – and ‘They Don’t Come Back’

You can watch the full moment in the video here.