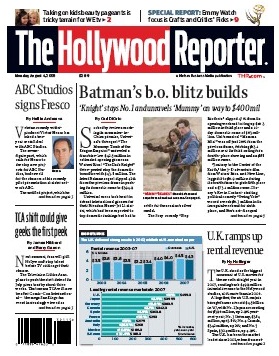 The Hollywood Reporter is up for sale, I’m told by two solid sources. Are you really surprised? At a time of deep decline in the newsprint business, and with rival Variety  already on the auction bloc, the Nielsen Company has quietly put up for sale the bundle of 42 trade papers in its Business Media division, which includes THR, Billboard, Backstage, Adweek, Brandweek, Mediaweek and Editor & Publisher.

Here’s why this makes sense: The value of the trade paper, once a Nielsen flagship, has declined from a $20 million EBITDA to $9 million, and may drop as low as $6 million in the coming year, according to my sources. The trade has already eliminated about one-third of its 135 positions, which includes a significant number in ad sales, and editorial cuts in such key news centers as New York and Washington. Most distressing is that despite the website’s major redesign in late April, web traffic has seen no appreciable change, and indeed is declining of late.

The folks in charge at Nielsen dispute the news, but aren’t exactly in lockstep. Eric Mika, publisher of The Hollywood Reporter, said he hadn’t heard a thing. “I wouldn’t say it’s true or false,” he said. “It hasn’t come across my desk.” He noted that the Reporter is investing in new initiatives, and reported “fantastic growth on subscriptions in print and digital” in the past three months. (If so, online growth is invisible to the naked eye.) Transforming the international edition into a Friday weekend edition in January has bumped circulation 22 percent, he said.

Gerry Byrne, who since February has led this division, emphatically denied that it is for sale. “We’ve got big plans to expand. The challenges of change are big. But content is king.” He hinted that the Reporter would expand into the consumer business. “We’re going where we can hit our primary customers, but we’re looking at consumers,” he said. “The joint is not up for sale.” Byrne said that reports of a sale may be coming from “unsolicited callers” who are eager to get their hands on the well-known brands in his division.

I doubt it. Anyone can see the Reporter is not thriving. And neither of my sources, who each declined to go on the record, are in a buying mood.