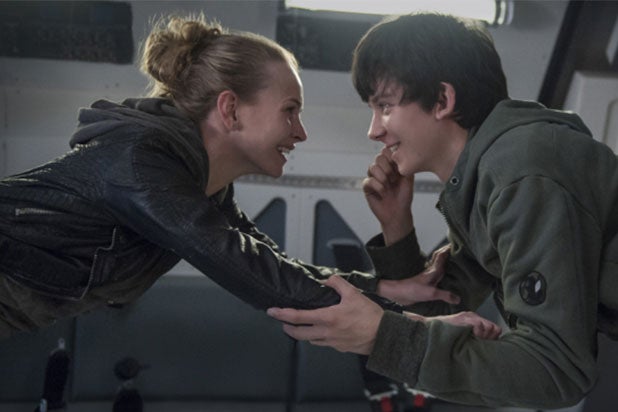 “The Space Between Us” is having a rough launch ahead of its theatrical debut on Friday. The film holds a current score of four percent on Rotten Tomatoes.

“It’s hard not to engage in eye-rolling over what already promises to be one of 2017’s worst movies: ‘The Space Between Us’ spends so much time piling one daffy, laughable plot beat upon another that it never bothers to nail down the characters,” wrote TheWrap’s film critic Alonso Duralde.

More than 20 critics seem to agree with Duralde, describing the film starring Britt Robertson and Asa Butterfield as “unbearably ridiculous” and one that “stumbles, staggers and sputters out of the gate.”

Also Read: 'The Space Between Us' Review: Martian Teen Saga Earthbound by Inanity

The rom-com, about a Martian boy who travels to earth to meet his pen pal but discovers his organs can’t survive on earth, was written by Allan Loeb (“Collateral Beauty”) and directed by Peter Chelsom.

“Veterans like Gary Oldman and Carla Gugino bring flashes of dignity and sometimes even emotional truth to this frequently silly enterprise. But–like Will Smith, Kate Winslet, Helen Mirren and Naomie Harris surely found while making ‘Collateral Beauty’–there’s only so much you can do with a soggy Allan Loeb script. The twists are just unbearably ridiculous, which drains all the power out of their supposed catharsis.”

“Armed with a good cast and an intriguing premise, ‘The Space Between Us’ nevertheless fails to launch. Ooh. Sorry. Space joke, which is fitting, as you’ll see. Peter Chelsom’s film was supposed to open in 2016 but didn’t. Despite the delay, it seems unfinished, choppy, the storytelling almost of the after-school special variety.”

“‘The Space Between Us’ never quite finds its center of gravity. The Peter Chelsom-directed film starts on a strong note, but the film spends its entire first act with what feels like pre-credits prologue material. There is a lack of clarity and urgency to the storytelling even as nominally interesting things occur or develop. A game cast does what it can with a movie that moves in fits-and-starts and becomes its own worst enemy.”

Also Read: STX Bumps 'The Space Between Us' From 2016 to Avoid 'Passengers'

“Sweet, earnest and kind of lame, “The Space Between Us’ is a sci-fi/road movie/coming of age saga/love story that’s also sometimes a fish-out-of-water comedy. It tries so hard, melding so many genres, offering a rare (mostly) positive look at the near-future in the age of ‘Black Mirror,’ that you want to hug it and not tell it what you really think. You can say it’s not even the same universe of embarrassment as ‘Collateral Beauty,’ the last film written by its author, Allen Loeb.”

“The science is sloppy, the sentimentality is sloppier in ‘The Space Between Us,’ a sci-fi romance pairing up agreeable leads in a cut-and-paste script. Sci-fi buffs — imagine ‘Capricorn One’ without the suspense, ‘Starman’ without the pathos, all shot on sets left over from ‘The Martian.’ It stumbles, staggers and sputters out of the gate, and only comes to life after an hour of blundered, banal back story.”

“Director Peter Chelsom’s ‘The Space Between Us’ may not be as majestically loony as David Frankel’s ‘Collateral Beauty,’ which was also scripted by Allan Loeb, but this young-adult, science-fiction romance becomes so overwhelmingly saccharine as it progresses that one almost wishes for a trace of madness to offset its leaden metaphors, cheesy dialogue, and overbearing soundtrack. Instead, ‘The Space Between Us’ is simply disappointing when it isn’t trying to browbeat its audience into emotional submission.”

“Suddenly, it’s clear this movie is ridiculous… Suddenly, the nonstop silliness of this picture leaves one choking on stifled laughter.”