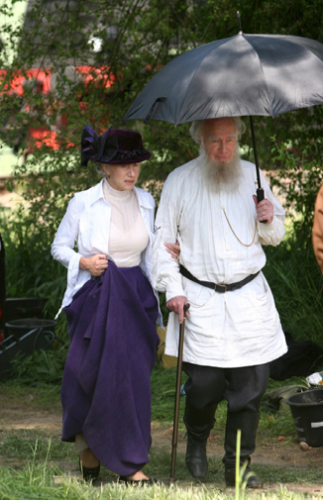 Made with the support of the Tolstoy family, the film tells the story of the last days of the famed Russian writer.

When a young intellectual (James McAvoy) arrives at the rural estate of Tolstoy (Christopher Plummer) in 1910, he finds himself caught up in a power struggle between Tolstoy’s wife, Countess Sofya (Helen Mirren), and the conniving leader of a Utopian society (Paul Giamatti) begun by the writer himself. They’re fighting over how Tolstoy’s literary estate will be handled after his death.

"With ‘The Last Station,’ Michael Hoffman has crafted a film that is not only beautifully made, but showcases some of the world’s greatest actors in roles of a lifetime," said Sony Pictures Classics.

"The film is also incredibly entertaining and moving and we look forward to working with our friends Jens Meurer, Chris Curling and Robbie Little to bring it to audiences."

"It’s such a relief and a pleasure to be working with talented people you can trust," said director Michael Hoffman. "I love the guys at Sony Pictures Classics. It’s a perfect home for our film."

Screenwriter and director Hoffman adapted Jay Parini‘s highly acclaimed 1990 novel of the same name.  The film screened at the Telluride festival this year.

The film is a German-Russian production, made with the full support of the Tolstoy family and filmed mainly in the German state of Saxony-Anhalt. It was produced by Chris Curling ("Hannibal Rising"), Jens Meurer ("Russian Ark," "Black Book") and Bonnie Arnold ("Tarzan," "Toy Story").  It was executive produced by Andrei Konchalovsky.