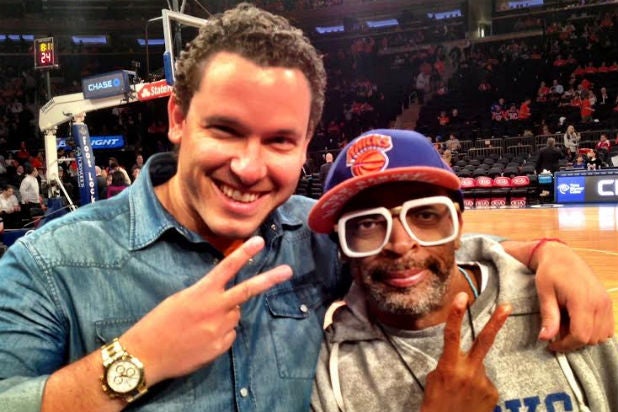 As part of my birthday splurge, I bought courtside seats at the Knicks and dinner with Spike Lee. I’m from Connecticut, so I’ve been a Knicks fan all my life — going to games with dad as a kid. Sitting courtside next to Spike Lee is just about as good as it gets — and I wasn’t quite sure what to expect.

Full disclosure: I donated $10,000 to his Kickstarter campaign to support his new movie, “Da Sweet Blood of Jesus.” Donating at that level earned me one of the best seats in the house, with one of Hollywood’s most well-known directors.

Spike and his daughter greeted me outside Madison Square Garden before the game, where we entered the stadium through what seemed to be Spike’s own private entrance. High-fiving all of the security guards and MSG employees, it was as if he owned the place. And because it was the final game of the season — with no playoffs in sight — everyone who worked at MSG said their goodbyes to Spike, his daughter and me. That aspect of the experience made me feel like part of the Knicks family.

We had a very nice dinner in one of the dining rooms reserved for VIP members. I’m a foodie, but I didn’t even bother gorging myself on the buffet — I was there for the company, and the experience.

Our dinner conversation covered several topics, including the stock market, our favorite charities and the upcoming film from Spike’s daughter. I tried to get some insight into his new projects, but he’s a veteran at deflecting questions. So when that didn’t work, I tried to pitch him on an entire movie about traders. As a trader myself, and in the wake of “Wolf of Wall Street’s” success, I pitched my take and he smiled politely at my ideas. But somehow I don’t think he’ll do a stock market movie anytime soon.

After dinner, we headed to our seats — meeting Knicks players like JR Smith and the team’s cheerleaders along the way.

Once the game started, watching it right next to Spike felt very surreal. I felt like the entire stadium’s eyes were on me (of course they weren’t, but if they were, it was probably because they were like: “Hey, why is Spike here with a white Jewish kid?”).

During the game, everyone from the players to the coaches – even the referees – came over to talk to us. (Well, mostly Spike.) At one point, Spike and I both got in the referee’s face over a play – watch the video below.  Spike even bought me a $7 soft pretzel – now that was special.

Overall, game night with Spike exceeded all of my expectations. I wish all NBA fans – especially Knicks fans – could have a similar one.

Money can’t buy happiness, but it can definitely buy a memorable experience like this.

Timothy Sykes is a self-made millionaire trader and author of the blog TimothySykes.com and best-selling book An American Hedge Fund. At the age of 22, Sykes became a millionaire when he turned his $12,415 Bar Mitzvah gift money into $1.65 million trading penny stocks while studying at Tulane University. Today, Sykes works as a financial activist and educator, with more than 5,000 students in over 70 countries. Most recently, two of his students crossed the $1 million profit mark, which was featured on CNNMoney, Fox Business,  Fox & Friends, among others. Visit his website: www.timothysykes.com