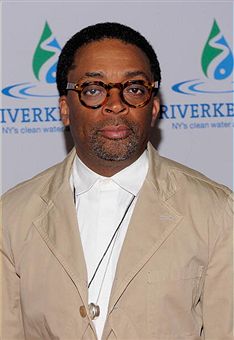 Is Spike Lee making a movie about late pop singer Michael Jackson — at least as he relates to the gentrification of Brooklyn? That’s what Showbiz 411‘s Roger Friedman is reporting and The Playlist has confirmed.

In an April 2 blog post, just below a bogus report about "Inside Man 2," Friedman claims that Lee has lined up regulars Samuel L. Jackson, John Turturro and Rosie Perez, plus Julianne Moore for a project tentatively titled "Brooklyn Loves Michael Jackson."

That’s what Lee called the Michael Jackson memorial/birthday extravaganza he threw last summer in Prospect Park while wearing a T-shirt emblazoned with those same four words.

The Playlist has gotten its hands on the fourth draft Lee’s script, which it playfully refers to as "Brooklyn Hearts MJ."

Friedman speculates that Anthony Mackie ("The Hurt Locker") and Kerry Washington ("Lakeview Terrace") could also be involved in the project, since they previously starred together in Lee’s "She Hate Me." I first took notice of the enormously talented Mackie in Lee’s made-for-Showtime-movie "Sucker Free City" when I was stuck in a Hawaiian hotel with sun poisoning while on a family vacation as a teenager.

I’ve been Mackie’s biggest fan ever since, and remain incensed that the Academy snubbed him for a Best Supporting Actor nomination for his career-defining performance in "Locker."

The "Brooklyn Hearts MJ" script starts off in the borough’s Bed-Stuy neighborhood in the summer of 1989 before quickly jumping to Fort Green in the summer of 2009. The protagonist is a Jackson-obsessed, African-American DJ named Brooklyn Godlove who, along with his school teacher wife, attempts to put on a communal neighborhood block party in tribute to Jackson, an event that the white president of the local resident’s association strongly opposes.

Meanwhile, Brooklyn’s drug-dealing half-brother Tariq continues to give the neighborhood a bad name, leading to an unavoidable showdown between the two.

The Playlist describes the film as a companion piece to Lee’s "Do the Right Thing" that will examine race relations in America’s supposedly "post-racial" Obama era. The "provocative" screenplay reportedly features several of Jackson’s songs (the rights to which could be hard to come by), including a full-on musical number set to "Wanna Be Starting Something."

The film is scheduled to go before cameras this summer in Brooklyn should the project find financing in time.