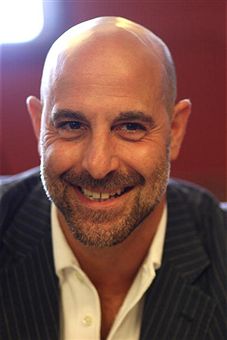 In the comics, Dr. Erskine was a German scientist behind Project Rebirth, the secret experiment that turned Steve Rogers into a Super Soldier.

Tucci has long been one of the best character actors in Hollywood, dating back to his turn as a sympathetic villain in "Murder One," and he also has plenty of experience playing a doctor, having earned fictional degrees in "Monkey Shines," "The Core," "3 lbs." and "ER."

The 49 year-old actor enjoyed a big-screen breakout of sorts last year, when he charmed the pants off of Meryl Streep and audiences alike in "Julie & Julia" only to earn a well-deserved Oscar nomination for playing the creepy child murderer in Peter Jackson’s adaptation of "The Lovely Bones."

Tucci next appears as Emma Stone’s father in the Screen Gems comedy "Easy A" and co-stars in the dance film "Burlesque." He recently lent his voice to the animated movies "Space Chimps" and "The Tale of Despereaux" and will soon return to animation by providing a voice for the upcoming animated film "Cat Tale." He’s currently filming the drama "Margin Call" with Kevin Spacey, Zachary Quinto and Carla Gugino.

Tucci is represented by CAA.