Viewed from the south steps, the Sydney Opera House looks very much like the Star Fleet-style logo used by Paramount to promote J.J. Abrams’ retooling of  “Star Trek” for a new generation.

The symbolism wasn’t lost on organizers to last night’s Down Under world premiere, as guests snaked up a wide red carpet and into what amounted to an impromptu blue-lit outline of the Enterprise. 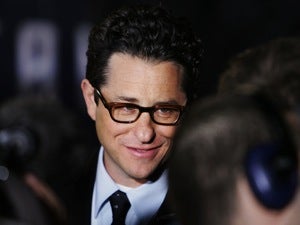 Meeting the fans on their way in were Abrams (pictured at left), newly minted Kirk and Spock in Chris Pine and Zachary Quinto, along with John Cho, who plays Sulu, new Bones man Karl Urban and local boy Eric Bana, who takes the role of the Romulan villain.

But in an unusual move, Paramount fans were also inside the red line after a limited number of tickets were offered to the public at $A100 each and quickly snapped up.

Spock ears and skivvies were in short supply, though, with organizers asking fans to comply with the “cocktail wear” dress code.

Taking to the Concert Hall stage before over 1,600 media, Sydney socialites and fans, Abrams waxed effusive about Sydney — saying he chose the city as soon as Paramount told him they wanted to have the world premiere outside the United States.

Abrams introduced his stars over the excited catcall of a female fan who declared “They’re not as handsome as you.”

But it was Bana who brought the Opera House down by briefly breaking into the Australian national anthem.

This premiere event a month before a wide release wasn’t a misplaced vote of confidence, and it comes as little surprise that the follow-up phaser has been set to “greenlight” already.

Although media outlets were initially subject to a review ban until April 21, paying ticket holders were free to post their thoughts online.

More fulsome blog reviews from the unofficial premiere for a stunned audience at the Austin, Texas, Drafthouse cinema who thought they were seeing a new print of “Star Trek II: The Wrath Of Khan” until Leonard Nimoy unveiled the new “Star Trek” also soon flooded into Aint-It-Cool-News.

And then Empire magazine in the UK published the first full review, leading to Paramount lifting the embargo.

From tweets to blogs to Empire’s critique, the good news is the response has been rapturous.

During the film, the usually reserved Australian audience burst into spontaneous applause and cheers on five separate occasions and rewarded the film with a thunderous standing ovation as the end credits rolled.

Despite media outlets being subject to a review ban, paying ticket holders are free to post their thoughts online.

Needless to say, the first Twitter critiques came through within minutes of the film ending in Sydney. (And more fulsome reviews from the unofficial premiere for a stunned audience at the Austin, Texas, Alamo Drafthouse cinema who thought they were seeing a new print of “Star Trek II: The Wrath Of Khan” until Leonard Nimoy unveiled the new “Star Trek” are also flooding into Aint-It-Cool-News.)

While box office will depend on widespread acceptance of the new “Trek,” word-of-mouth from fans will be an ignition point — no doubt part of the reason the premiere was opened up to them.

With that in mind, I spoke with Aurelia Cimino, 49, general secretary of Austrek, the Australian Star Trek fan club established in 1976, shortly after the film.

She and four other Melbourne-based club members had that day driven some 500 miles to attend the event and, to a Trekkie, they weren’t disappointed.

In fact, they were exuberant.

“I loved it,” she said. “I think J.J. Abrams has done the right thing. Without wanting to spoil anything, this is going to get a new audience for “Star Trek.”  A younger audience will become interested, but it’ll satisfy the old guard like me.  They’ll be very happy with the movie.”

“If you loved “Star Trek,” it doesn’t delve deeply into the ethos, the deep and meaningful stuff of the original series, but the camaraderie has been established,” she continued. “Zachary Quinto was magnificent, as was Chris Pine as Kirk. There are a few moments there where you thought where they were channelling the original characters — not mimicking, but channelling. And Karl Urban was also fantastic as Bones. People are just going to fall in love with these characters.”

I asked her to rate it out of five and she unreservedly gave it a five. Any criticisms at all, I prodded. “The only thing I’d criticise was the shakiness of the camera in some of the action scenes — but that’s just me being an old fuddy duddy. But, looking around the audience, and a lot of people there weren’t what you’d call fans, I didn’t see anyone who wasn’t enthralled.”

John Crew, 27, and a general committee member of the 160-member strong Austrek, was just as enthusiastic — even after being the designated driver for the group’s 11-hour road trip.

“I absolutely loved it, I just wanted to start watching it again as soon as it was finished,” he said. “I liked the humor — everyone laughed. The whole cast did such a good job emulating the original characters.”

Was he moved to tears, choked up, at any point?

“Look, I’m not a huge fan of the original TV shows,” he laughed. “I wouldn’t knock them but I was brought up on the movies and on “The Next Generation,” so, no I didn’t get teary. I just thought it was excellent. But another lady in our fan club was crying as we left and she was saying, ‘They’ve just done such a great job!’”

Any criticisms at all?

He thought long and hard. Nope.

“Look, some hard-core fans have questioned certain things, how they’ll be done, but I think they’ll be converted as soon as they see it.”