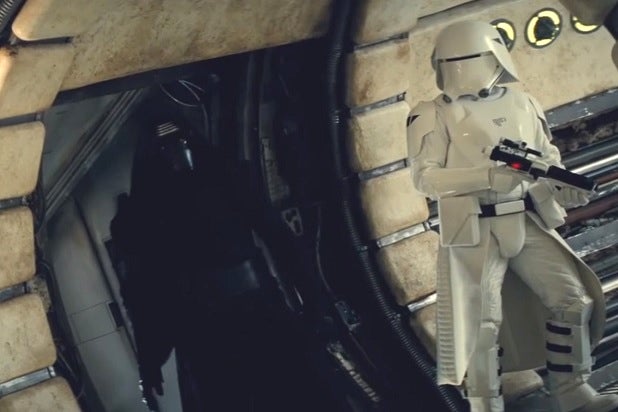 One of the bigger appeals of the home video release of “Star Wars: The Force Awakens,” whether it be disc or digital, is the deleted scenes that come with it.

We’ve gotten our hands on the blu-ray, which hits shelves Tuesday, April 5, and have seen what those extra scenes have to offer. Please note that we’ve only seen the six extra scenes included on the disc itself — one more, featuring Finn, Han Solo, Chewbacca and Maz, will come attached to the digital version that releases Friday.

They aren’t really that substantial, consisting mostly of the kind of moments that flesh out certain parts of the movie a little bit, adding a little extra flavor. In any case, here’s a complete rundown of what you’ll find.

Finn and the villager (30 seconds)
This scene takes place near the beginning of the film, when the First Order Stormtroopers and Kylo Ren assault the village on Jakku where Resistance pilot Poe Dameron was receiving information on how to find Luke Skywalker. Finn, still wearing his blood-stained Stormtrooper armor, wanders off during the slaughter and encounters a lone villager holding what looks like a bundled-up baby. Shaking, Finn points his gun at her, then slowly lowers it and she runs off.

Jakku Message (45 seconds)
The Resistance receives a message from Jakku, still early in the film. Leia is told that Poe’s X-Wing was destroyed when the First Order assaulted the village but there’s no sign of him or BB-8. “Never underestimate a droid,” Leia says.

Resistance pilot Snap Wexley (who leads the air assault on the Starkiller base near the end of the movie) asks, “Should we contact the Republic?”

“We have to be smarter than that,” Leia replies. “Find BB-8 immediately. Our future may depend on it.”

X-Wings prepare for lightspeed (18 seconds)
The X-Wing squadron, including Poe Dameron, gets word that the Millennium Falcon landed on Starkiller Base and takes off from the Resistance base to follow up with the climactic air assault.

Kylo Searches the Falcon (45 seconds)
Kylo Ren and some First Order Snowtroopers (their armor looks derivative of what the stormtroopers wore on Hoth in “The Empire Strikes Back”) find the Millennium Falcon crashed on the surface of Starkiller Base. They walk around inside, and Kyo Ren makes his way to the cockpit, after which he utters the name “Han Solo” in disgust. Then Kylo Ren and the Snowtroopers go back outside and see the X-Wings flying down to assault the base.

Snow Speeder Chase (48 seconds)
Finn is driving an airspeeder, with Rey in the passenger seat. They’re being chased by a Snowtrooper in a similar airspeeder, and Rey is firing a rifle as they try to evade their pursuer. Finn suggests they swap seats, seeing as how she’s a pilot and he’s a soldier, and they do. Finny then makes quick work of the Snowtrooper.

Finn’s Going to be Fine (21 seconds)
Finn is brought in on a stretcher after his and Rey’s confrontation with Kylo Ren in the snow. Rey watches, looking shaken up, and a random Resistance woman says, “your friend’s going to be just fine.”

Though none of these scenes fill in any plot holes or provide enlightening new character moments, they do feel like the sorts of pieces that, were they added back into the movie, could have given it a little bit of extra room to breathe.