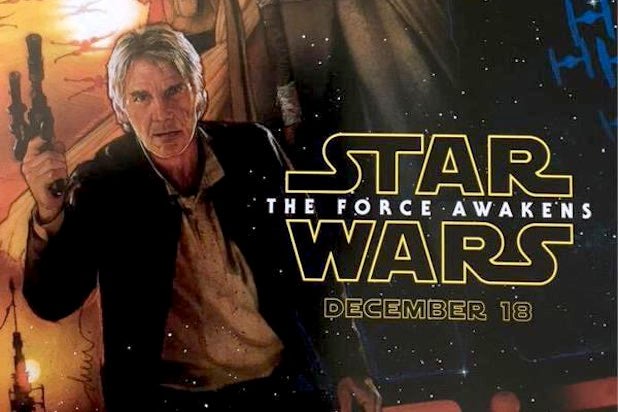 “Star Wars: The Force Awakens” is celebrating the return of Han Solo by placing the aging fan favorite front and center on the new poster for the sequel.

A picture of the poster (below) hit the web on Saturday after the studio’s D23 presentation for the film directed by J.J. Abrams.

The poster, which is reminiscent of marketing material for previous “Star Wars” movies, also features newcomers John Boyega and Daisy Ridley. The image was designed by artist Drew Struzan, who was also behind the final theatrical posters for the special edition of the “Star Wars” trilogy, as well as the prequel trilogy.

According to “The Force Awakens” Twitter feed, the poster is the commemorative poster for D23, and the “official theatrical poster is still to come.”

Boyega, who was seen removing a Stormtrooper helmet in the first teaser Lucasfilm released months ago, wields a blue lightsaber, indicating his hero status opposite Adam Driver’s Kylo Ren — a mysterious practitioner of the Dark Side of the Force who wears a mask meant to be nod to Darth Vader.

“Following in the footsteps of George Lucas, the author of the early chapters of my story, I’m delighted to be here now with J.J. and this wonderful cast and with Disney which has supported this effort in a really extraordinary way and will continue to do so I’m sure. It’s great to be here with you because you make this whole thing happen. Thank you so much,” said Ford.

Take a look at the poster in all its glory below.

This will be a day long remembered.. The official Star Wars #TheForceAwakens poster is out! #D23Expo pic.twitter.com/DTb39QIeTC