Is somebody worried about the ratings for NBC’s “Community”? Already carrying two shows on his back (E!’s “Soup” and the (lower) higher education comedy), plus standup comedy tours and a new baby, the usually party-shy Joel McHale has been working the press lines the last two nights. 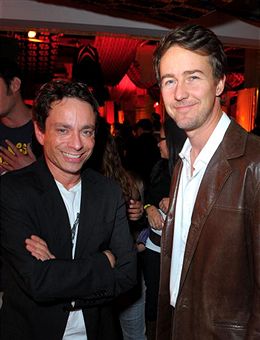 Along with McHale, Ed Norton, Jessica Stroup and James Van Der Beek stamped their passports to an unrecognizable former retail space on the Miracle Mile (created by Jeffrey Best). Guests including John Hensley and Anoop Desai designed their own gear and got to play an American version of sweat-free soccer – Foosball. 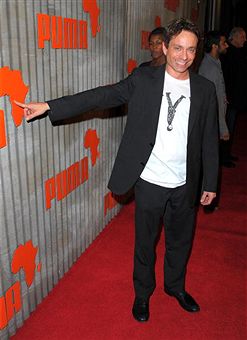 Because Norton premiered his behind-the-scenes Obama doc “By the People” during the the same week he finished the NYC marathon (running on Puma‘s team for the Maasai Wilderness Conservation Trust), he would have been well entitled to relax in the bazaar’s lounges with a distinctly un-African refreshment – free-flowing Patron tequila. Hanging out with Chris Kattan isn’t a bad reward either. (pictured above and at right; photos by Getty Images) 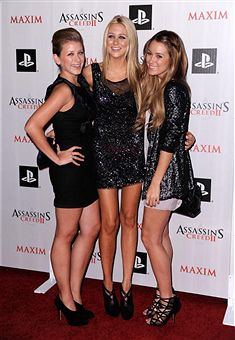 Female rockers The Darling Stillettos, with Matt Sorum, treated the donors to originals and covers like “Rebel Rebel,” “Dancing With Myself” and other classics from bleach-blond rockers. The crowd, including Seth Green, Chris Klein and Samaire Armstrong, approved. Christina Aguilera and Nicole Richie pulled wardrobe from their closets to donate for an auction.

Over at Voyeur, the less-rocking singer/dancers of Fox’s “Glee” – Cory Monteith, Lea Michele and Harry Shum Jr. – hit the premiere for UbiSoft’s video game “Assassin’s Creed II.” The crowd parted for Shum to show off in a dance circle during an LMFAO song.

Kristen Bell, Sofia Milos (“CSI: Miami”) and the usual party monsters from “Dancing With the Stars” and “The Hills” (pictured at left; photo by Getty Images) checked out the Arabian-themed game scenes on the flat screens — and not the Maxim models climbing across the ceiling – completing the African throughline on Wednesday night.