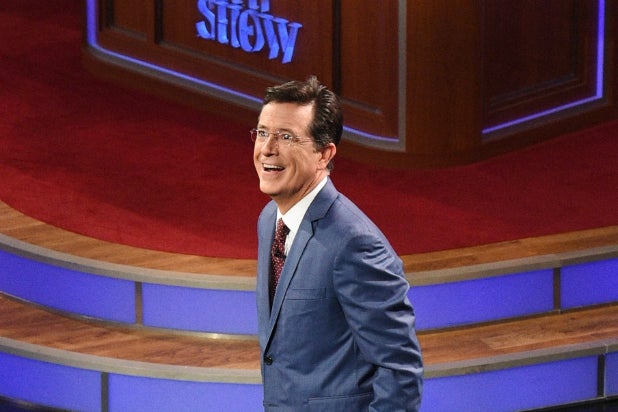 Stephen Colbert premiered as the new host of “The Late Show” on September 8, 2015. Fast-forward one year (and one day, that’s how the calendar works) later, and he’s proved to be virtually no threat whatsoever to Jimmy Fallon.

From Colbert’s CBS debut, through Friday, September 9, 2016, the former Comedy Central personality has averaged a 0.62 rating in the advertiser-sought 18-49 demographic. He’s pulled in 2.822 million total viewers per episode over that same time frame.

Compare those figures to Fallon, who has hauled in a 1.00 demo rating and 3.652 million total viewers over that stretch. That’s a 61 percent advantage among those 18-49, and 29 percent better when counting all adults. CBS draws an older clientele, explaining away much of that disparity between eyeballs of a certain age and overall tune-in.

By the way, Fallon has beaten Colbert in the demo every single week since “The Late Show” changed hands  — that includes the first five days of the post-David Letterman era. “The Tonight Show” has bested Colbert in total viewers each week after the former “Colbert Report” host’s debut one, which Stephen won.

And just in case you think the CBS version bests NBC’s in that hour among the older 25-54 demographic, it does not. The One-Two ranking holds in every single key ratings category.

It’s not all doom and gloom for Colbert, however. The new guy is still outdoing the mailed-in performances that Letterman offered towards the end of his run — but it’s dangerously close by some comparisons.

Of course, this isn’t a two-horse race. Jimmy Kimmel’s got a little something to say about 11:35 p.m. — but unfortunately, the optimum word there is “little.” “Jimmy Kimmel Live” has averaged a 0.53 in the main demo and 2.296 million total viewers in the 12 months since Colbert started at “The Late Show” — good enough (or bad enough, really) for third place.

To be fair to Kimmel, he’s been more evenly matched with Colbert in recent months — the latter’s debut numbers are skewing the year-long averages a bit.

But those Kimmel demo numbers are actually not that much better than Seth Meyers‘ “Late Night,” which airs an hour later. One could even say the same thing about “JKL” versus “The Daily Show” — and Trevor Noah’s not even lighting up cable.

Unfortunately, it’s not like things are getting any better for either Colbert or Kimmel.

Meanwhile, last week, both Fallon and Meyers scored their best numbers since January. In doing so, “Tonight” topped Colbert and Kimmel combined in the demo, while “Late Night” trumped both individually, despite its less-desirable time slot.

It should be noted that an NBC “Thursday Night Football” overrun helped out there a bit, and all shows took a break for Monday’s Labor Day holiday — though perhaps Fallon and Meyers are the only two who truly deserved a night off.