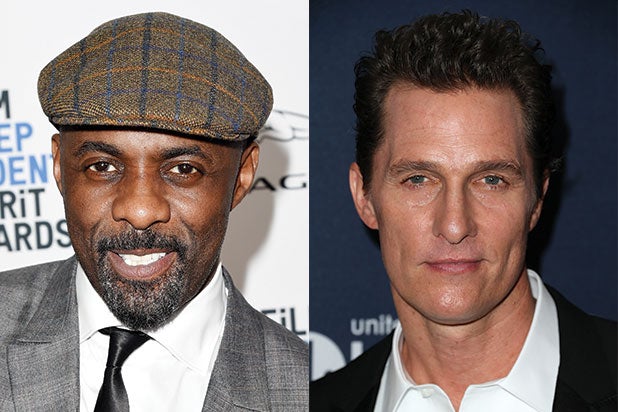 Stephen King has confirmed that Idris Elba and Matthew McConaughey will star in the film adaptation of his novel “The Dark Tower.”

“It’s official: The man in black fled across the desert and the gunslinger followed. #DarkTowerMovie,” King tweeted Tuesday.

That line is the first sentence of the book, which King told Entertainment Weekly will also be the opening line of the film, which is set for a January 13, 2017, release.

TheWrap previously reported that both Elba and McConaughey were in negotiations for the roles of the gunslinger Roland Deschain and the man in black, respectively. The two actors took to Twitter to taunt each other about their roles in the film shortly after King’s announcement.

Sony Pictures and MRC are co-financing the ambitious feature film, which Nikolaj Arcel will direct from a script by Akiva Goldsman and Jeff Pinkner that’s primarily based on the first book in King’s series, “The Gunslinger.” Arcel is currently working with Oscar-winning Danish filmmaker Anders Thomas Jensen (“Election Night”) to rewrite the script.

A few weeks ago, it was announced that “Mad Max: Fury Road” actress Abbey Lee was in negotiations to play the female lead opposite Elba’s Roland Deschain.

King’s book blends horror and fantasy to tell the tale of a gunslinger who has taken up the lifelong quest of locating the Dark Tower — which is the nexus of the universe — before evil invades and destroys the tower, ending all existence.

“[The movie] starts in media res, in the middle of the story instead of at the beginning, which may upset some of the fans a little bit, but they’ll get behind it, because it is the story,” King told EW.

“The Dark Tower” has been Imagine Entertainment’s baby for many years. Ron Howard, Brian Grazer and Erica Huggins are producing for the company along with Goldsman and his Weed Road banner. Pinkner is expected to executive produce with Modi Wiczyk of MRC, which is also developing a companion TV series that’s long been part of the adaptation plans.

Sony chief Tom Rothman has positioned “The Dark Tower” as the start of a global franchise, saying in an earlier statement that “there are few projects out there that compare with the scope, vision, complex characters and fully drawn world that Stephen King has created.”

The project had previously been set up at Universal and then Warner Bros., though neither studio managed to get it off the ground.

It's official: The man in black fled across the desert and the gunslinger followed. #DarkTowerMovie @McConaughey @IdrisElba