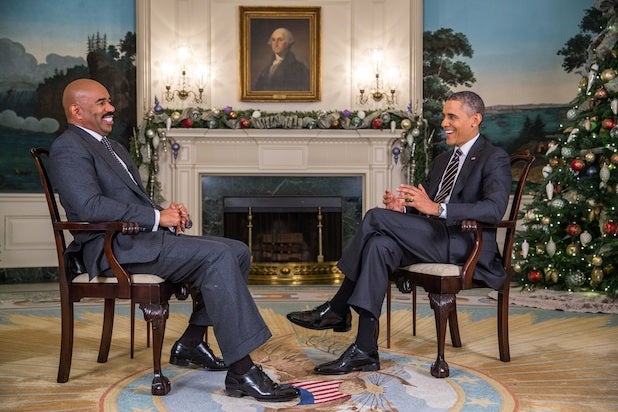 “Hardball’s” Chris Matthews was just a warm up for President Barack Obama. The real test comes on Friday when he sits with Steve Harvey at the White House for his syndicated daytime show.

Harvey plans to speak with the POTUS about the hard-hitting topics of “family, fatherhood and his plans for the holidays” for the episode airing on Friday, Dec. 20.

“Sitting down with the President is something I’ve always dreamt of doing, and I am honored to have the opportunity,” said Harvey in a statement. “I’m grateful to President Obama for welcoming me and I’m thrilled to share this experience with all my viewers.”

Harvey may have earned the coveted interview with the promise of his 2.5 million daily viewers and growing. During November, the show earned series highs for four consecutive weeks.

The interview should be a welcome reprieve for Obama from the tougher media appearances he has been doing lately, which include having to speak on topics ranging from NSA surveillance, the affordable health care act AKA Obamacare and a nuclear deal with Iran, among other major issues.