It’s safe to say that Steve Kornacki didn’t become a political numbers wiz for the fame. And yet, the 36-year-old MSNBC host has somehow emerged this election season as his network’s unlikeliest breakout star.

Earlier this month, Kornacki was anointed one of two people to watch by MSNBC’s reigning queen of political coverage, Rachel Maddow. “Honestly, ask anybody who you know, who you value their judgment about people who work in this business,” Maddow told her more 1 million-plus nightly viewers, “you’re going to hear Steve Kornacki.”

She went on to say that even though he was smart to begin with, “something” had happened to him this year, calling him and fellow anchor Joy Reid “super-powered.”

“It’s been a fun year,” Kornacki told TheWrap. “I have a specialization in a very particular area: the presidential primary process. So, it’s sort of my season.”

That seems to be the prevailing consensus among the network’s top brass as well.

“Steve has emerged as Rookie of the Year this election season,” MSNBC President Phil Griffin told TheWrap. “He has an impressive knowledge of what’s going on at every level state by state and county by county.”

Asked what makes Kornacki stand out in a seemingly endless parade of TV pundits, marketing expert and founder of the Los Angeles-based “The Brand Identity Center,” Chad Kawalec, said: “He’s trustworthy, which is the No. 1 desired trait for any brand. And he’s handsome in a nerdy, Silicon Valley kind of way.”

Kornacki insists numbers were never his strong suit. “I almost flunked pre-calculus back in high school,” he said. “I can multiply. Long divisions start to be a stretch.”

But as he recently proved, even the most seasoned political spin doctors have learned not to underestimate MSNBC’s geeky map guy. 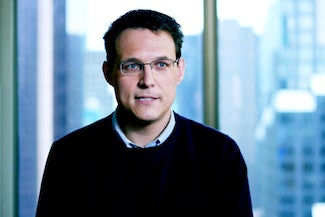 Kornacki grew up in Groton, Massachusetts, a small town about 30 miles northwest of Boston. After graduating from Boston University, he got a job as a reporter for a New Jersey website covering state politics. He went on to co-host a local political show on News 12 New Jersey. A succession of high-profile reporting gigs soon followed. Kornacki quickly made his way up the political reporting ladder in publications such as D.C.’s Roll Call, The New York Observer and Salon.

But it was his guest appearances on cable news shows that caught the eye of MSNBC executives, who made Kornacki a prime-time regular. That led to several hosting jobs, including his current one as the anchor of “MTP Daily” on Mondays.

The 2016 election cycle, with its head-scratching delegate math, made him a star among political junkies. He also has a small but sizable gay following. Back in 2011, while working for Salon, Kornacki wrote an essay titled, “The coming out story I never thought I’d write.”

In it he opened up about the moment he first realized he was gay. “I had practically no idea until one night in my sophomore year of high school,” Kornacki wrote. “I was at a basketball game, and the guys around me started pointing out cheerleaders from the other team they thought were hot. I began to wonder: Why wasn’t I looking at the cheerleaders that way? And why was I sometimes noticing the other team’s players instead?”

Life, he says, hasn’t changed all that much. He’ll get recognized “randomly,” though he insists “it doesn’t happen all that much.”

Yet, as Maddow pointed out, people are taking notice. The first sign was a 2013 Huffington Post article titled, “Steve Kornacki Keeps Wearing The Same Sweaters, And It Is Time For Him To Stop (PHOTOS, POLL).” Several news sites then chimed in, including his former employer Salon, which published a list of other sweater possibilities, complete with pictures of Kornacki’s head superimposed on bodies of male runway models.

“It looks like I only have one,” he said, laughing. “But I have two. And they’re both the same shade of blue. People say, ‘Oh, he always has the same same sweater on.’ But I just picked one up from the cleaners this morning. It’s the other blue one.”

His attire seems to have garnered a lot of attention for a male anchor, and not just online. During the New Hampshire primaries earlier this year, MSNBC’s political pundit panel, led by Maddow and Brian Williams, affectionately poked fun at his casual on-air ensemble.

“It is amazing how much debate it caused,” Kornacki said. “Should you wear this? Should you not wear this? Please, wear something else. I get Twitter messages. I hear it all the time. I guess it shouldn’t surprise me but it kinda did.”

The only time Kornacki seems a little hesitant is when I ask him about life outside the newsroom.

“I wrote a thing a few years ago and I might have overshared a little,” he said, referring to his coming-out essay. “So, I’m going to try under-sharing.”