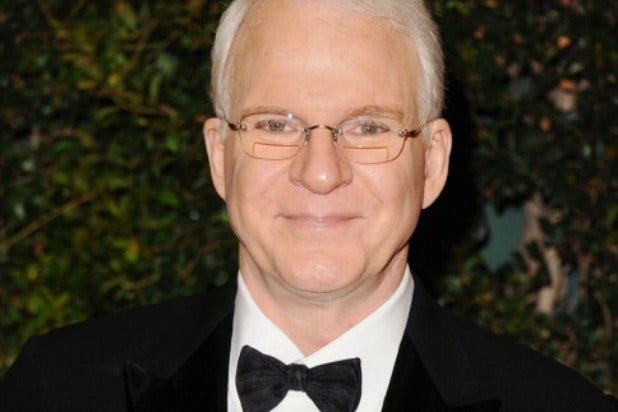 Steve Martin has apologized after tweeting a joke about the spelling of “lasonia,” but dinged news outlets that made the joke seem more offensive than it was.

Martin was joking with fans when a follower asked him, “Is this how you spell lasonia?” Martin replied: “It depends. Are you in an African-American neighborhood or at an Italian restaurant?”

He then deleted the respond and apologized, saying it was a riff on the African-American name “Lasonia.”

But when Salon reported on the tweet, it said he had asked, “Are you in an African-American restaurant or at an Italian restaurant?” The joke would have implied that African-Americans can’t spell. Salon later updated the story with a correction in small type: “An earlier version of this story misquoted the tweet.”

Martin later said on his website that his quote was “irresponsible,” and offered a “deep, sincere, and humble apology without reservation.” But he clarified that he was making a joke about an unusual name — nothing else.

Here is his full statement:

I am very upset that a tweet I sent out last week has been interpreted by some to be insulting to African Americans. By now media coverage of the unfortunate tweet has only added to this perception. To those who were offended, again, I offer a deep, sincere, and humble apology without reservation.

But I feel I need to tell you the context and origin of the joke.

I was riffing on Twitter, inviting people to ask me grammar questions. I replied with what I hoped were funny answers. For example, a person might write “What’s the difference between “then” and “than?” I would say, “then” is a conjunctive preposition, and “than” is a misspelling of “thank.” I have done similar things to this on other occasions, and there is a great spirit of fun between me and the Twitters followers.

I was going along fine when someone wrote, “Is this how you spell “lasonia?” I wrote: “It depends if you are in an African American neighborhood or an Italian restaurant.” I knew of the name Lasonia. I did not make it up, nor do I find it funny. So to me the answer was either Lasonia (with a capital), or Lasagna, depending on what you meant. That they sounded alike in this rare and particular context struck me as funny. That was the joke. When the tweet went out, I saw some negative comments and immediately deleted the tweet and apologized. I gathered the perception was that I was making fun of African American names. Later, thinking it over, I realized the tweet was irresponsible, and made a fuller apology on Twitter.

Then, Salon.com reported on the story and changed the wording of the tweet. They wrote: “It depends if you are in an African American restaurant or an Italian restaurant.” Clearly, this misquote implies that an African American restaurant can’t spell “lasagna” on the menu. And my name was attached to the misquoted tweet. Other websites, including TMZ.com picked up this incorrect version and for the next four days, and more, it continued to spread and I couldn’t get out of hell.

When the error was fixed, Salon footnoted it, but left the headline “Racist Tweet,” even though the tweet to which it referred had been expunged. I guess, to them, all tweets are interchangeable. However, one website which had jumped on me harshly, Twitchy.com, made a generous apology:

“The original version of this post stated that Martin’s tweet denigrated the spelling ability of people who live in African American neighborhoods. A more likely explanation is that he was referencing the tendency of some African Americans to use names that include the prefix “La.” If we misinterpreted his joke (and we think we probably did), we apologize.”

I felt a little better, but not a lot.

Comedy is treacherous. I used to try out jokes in clubs and the audience’s feedback would tell me when I had crossed a line, or how to shape a joke so it is clear. Today, the process is faster. It’s your brain, a button, then millions of reactions. But it’s my job to know.