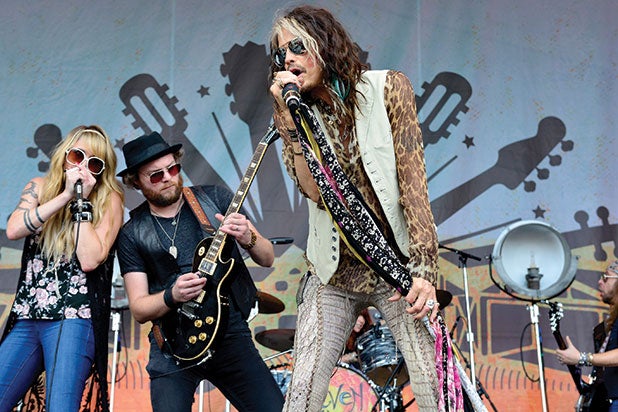 Steven Tyler has written an op-ed about the drama surrounding Donald Trump’s use of the Aerosmith song “Dream On” during his campaign events, stating that his concerns are about fair compensation, not politics.

“This week, I sent a letter to Donald Trump’s campaign asking to not use my music at political rallies,” Tyler wrote for the Huffington Post Thursday. “My intent was not to make a political statement, but to make one about the rights of my fellow music creators. But I’ve been singing this song for a while now.”

Tyler cited Taylor Swift‘s open letter to Apple in June, in which she announced that she would refrain from offering her “1989” album on Apple’s streaming service because she disagreed with its practice of offering a free month trial for users without offering artists proper compensation.

“We need change,” he wrote. “Songwriters, producers and artists can’t survive on what they are being paid.”

On Saturday, Tyler’s reps sent Donald Trump’s campaign a cease and desist order demanding an end to the use of “Dream On” at campaign events. It’s the second time Trump has been warned about using the ballad.

On Wednesday, Trump tweeted that he found a “better one to take its place” and therefore would no longer play the song at campaign events.

In the op-ed, Tyler cites the ever-evolving distribution landscape as a problem for songwriters and emerging artists.

Also Read: Steven Tyler Sends Donald Trump Cease and Desist Over Campaign Use of 'Dream On'

“Big changes are happening right now in copyright reform as a result of massive technology changes and with the way fans pay for music and consume music,” he said. “These changes can be a good thing for songwriters and up-and-coming artists, if we are paid fairly by those who make money using our work. Everyone deserves to be able to pay their bills, support their families, and do the work they love. Too many can’t because we are being shortchanged by new and old technology companies.”

Claiming that there is too much “government intervention in art and music,” the singer asked for people to support the effort to reform outdated copyright laws.

Even though I have the legal right to use Steven Tyler’s song, he asked me not to. Have better one to take its place!