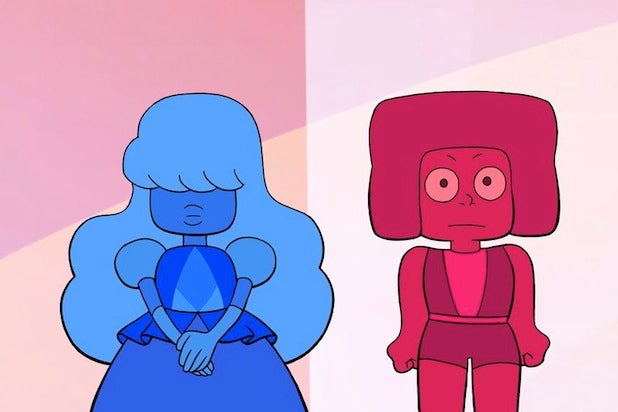 Since its premiere two years ago, Cartoon Network’s “Steven Universe” has made waves for creating a fun action-adventure series that also presents some deep messages for kids. It’s also up for its second Emmy nomination this year for an episode that depicts a romantic relationship between two of its female characters, gemstones named Ruby and Sapphire.

In the cult hit show’s colorful universe, Ruby and Sapphire fuse to form Garnet, a member of the powerful superhero team known as the Crystal Gems. Also on the team is Steven Universe, a half-human, half-gem hybrid who is the son of the Crystal Gems’ founder, Rose Quartz.

Along with his friends Garnet, Amethyst, and Pearl, Steven fights to protect the Earth from invaders from the Gems’ home planet, who seek to punish the Crystal Gems for starting a rebellion thousands of years ago that thwarted their plans to turn Earth into a Gem colony.

The show has gained a big following beyond its target demographic for pushing the boundaries of LGBTQ representation, as well as diving into themes like self-discovery and healthy relationships. “It’s very important to me that we speak to kids about consent, that we speak to kids about identity,” creator Rebecca Sugar said at Comic-Con last month.”I want to feel like I exist, and I want everyone else who wants to feel that way to feel that way too.”

TheWrap spoke with Sugar about the creative influences behind the Emmy-nominated episode “The Answer,” as well as some of the major events from this summer’s third season, including the defeat of the ruthless gem Jasper and the show’s newest gem fusion, Smoky Quartz.

Can you talk about the aesthetic influences in “The Answer,” which shows the origin story of the gem Garnet?

We wanted to give Garnet the ultimate animated fairy tale love story, with imagery inspired by all our favorite animated fairy tale love stories of all time. We started by drawing influence from Lotte Reiniger, creator of the oldest surviving animated feature film, “The Adventures of Prince Achmed.” The film is done with Lotte Reiniger’s signature silhouette animation technique and the compositions are stunning.We referenced the silhouetted characters, but also the dense, lush, ornate background compositions in the film.

“Sleeping Beauty” was also a huge influence, particularly for Garnet’s original form’s splash mix of and blue, and for Ruby and Sapphire’s dance by the water.

Is there any particular image from “The Answer” that you’re most proud of?

I’m very proud of Garnet’s first formation. That moment was the first thing I sketched for the episode!

And I love [series artist] Lamar Abrams’ boards for that scene… Ruby rushes to save Sapphire in this furious push against fate, and Sapphire, who has always been able to see the future and has never been startled by anything in her life, is suddenly, literally swept off her feet!

They fuse into Garnet, and I knew this Garnet would have to look and act completely different than the Garnet we’re used to. Garnet’s confidence is so much of her character, because it’s something she earned, and this was the first time we’d get to show her original state, a being that exploded out of an outrageously romantic gesture.

She’s dizzy and confused, a mish-mosh of Ruby and Sapphire, completely innocent, with no idea who she is. I wanted it to be clear from the moment you first see her, how far she’s come from this initial spark between Ruby and Sapphire, but also how powerful that spark was.

Since this is such an important episode for Garnet, did you have any talks with Garnet’s voice actor, the singer Estelle, about Ruby and Sapphire’s origins?

I really started getting in deep about Ruby and Sapphire with Estelle just before working on “Jailbreak.” Estelle gave me a lot of advice while I was writing “Stronger Than You.” I talked a lot about the nuances of their relationship around then. She knew all about their love, so this episode wasn’t a surprise aside from the specific details!

Which character has been the most fun to develop this season?

This last season I’ve been really enjoying focusing on Amethyst. Amethyst and Steven often take a back seat, since Garnet is in charge, and Pearl likes to feel like she’s in charge. It’s been exciting to get to unpack that Steven and Amethyst feel this, and how it affects them.

That focus on Steven and Amethyst leads to them taking down the villainous gem Jasper by fusing into Smoky Quartz. How do you go about designing a new gem fusion like Smoky Quartz?

I usually start with what the fusion needs to convey emotionally and try and explore from there. I knew Smoky would be an explosion of positivity, a big, happy kid with a yo-yo!

Amethyst tries to act like she doesn’t care what everyone thinks, but she really cares, she’s very nervous all of the time. But with Steven’s support, that nervousness is gone, and that’s Smoky! With that as a base we all worked together to make that come through, and to make a design that would work for Smoky as a big proud winner around Jasper, but also as a small excitable kid around Sardonyx.

Oh my gosh. Well, it’s meant to be a “Degrassi”-style show, though I never watched much of that myself! When it came to watching something obsessively and writing fan fiction, for me it was “Invader Zim” and “One Piece.”

You’ve spoken often about wanting to tackle topics you feel kids don’t get exposed to enough, and this season “Steven Universe” has addressed issues like recovering from trauma and negative relationships. Are there any topics “Steven Universe” that you’re looking forward to tackling in future episodes?

I know I’m talking directly to kids, and now that we’ve said a lot about relationships, I want to tell them they do not need a relationship to know they can be loved! You will know you can be loved if you already love yourself. You won’t need someone to validate you or prove your feelings were real if you already understand yourself and your own feelings.

After she’s defeated by Steven and Amethyst, Jasper refuses the help that Steven gave to previous adversaries like Peridot and Lapis. Why is that?

Jasper is very different than Peridot and Lapis. Unlike them, she has a deep hate for herself because of her origins on Earth. She is determined to never be weak or vulnerable. So at the point when she’s the lowest, there’s no way she’d ever accept help, because she believes she doesn’t deserve it.

Peridot and Lapis both believed they deserved better than what happened to them, but not Jasper. She went back to Earth to face her demons, and she lost. She’s consumed by her own self pity.

It seems that the next big arc for the series is revealing the flaws and failings of Rose Quartz and how Steven comes to terms with it. Since much of Steven’s image of his mother came from Greg, will he play a role in this next season?

“Steven Universe” airs daily on Cartoon Network at 7 PM, with a new episode premiering this Thursday. Check out our picks for this summer’s best episodes here or in the gallery below.

From silly baseball episodes to status-quo changing battles, the Cartoon Network series gave fans everything they could ask for this summer

There aren't very many TV shows, kids' or otherwise, with a success rate as high as that of "Steven Universe." Even the "worst" episodes of the series are fun, silly romps that play with the Crystal Gems' interests and foibles or shed more light on the residents of Beach City.
View In Gallery