You can accuse Roland Emmerich of many shortcomings as a filmmaker, but “sluggishness” usually isn’t one of them. What a surprise, then, as “Stonewall” turgidly creeps its way through 129 minutes, that the brash zing of “White House Down,” “2012” and even the loony Shakespeare-was-a-fraud melodrama “Anonymous” is nowhere to be found.

There’s certainly no faulting Emmerich and screenwriter Jon Robin Baitz for their good intentions in making a movie about the clash between LGBT bar patrons and the NYPD that many consider to be the starting point of the modern gay rights movement. (There had been previous confrontations in other cities, but history’s funny about where it drops a pin on the timeline.) Intentions, however, aren’t enough to guarantee results.

“Stonewall” somehow manages to be simultaneously bloated and anemic, overstuffed and underpopulated. It’s a story about a true historical event that spends way too much time on its fictional lead character; the tone is so erratic and artificial that it wouldn’t feel surprising if the movie suddenly became a musical. And as the film gets duller and duller, you find yourself wishing these characters would break into song, just for variety’s sake.

Not all historians agree on the details of the event, when patrons of the Stonewall Bar fought back against police harassment on the night of June 28, 1969, but it’s generally understood that the main participants were drag queens, trans people, butch lesbians and people of color. Naturally, the film’s hero is a hunky blond boy: Indiana-raised Danny (Jeremy Irvine, “War Horse”), who decamped to New York City when his football-coach dad found about his son’s secret relationship with the quarterback. 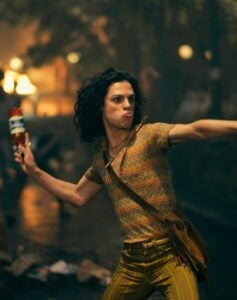 When the country boy arrives at Christopher Street three months before the riot, he immediately falls in with a group of street hustlers led by Ray/Ramona (Jonny Beauchamp, “Penny Dreadful”), who takes a shine to the newcomer. (Did neither Baitz nor Emmerich realize that centering this story around a blond newbie and a tough gender-fluid Latina had already been done by the superior 1995 “Stonewall,” featuring a pre-“Scandal” Guillermo Diaz?)

This new version scatters some real-life LGBT activists — Marsha P. Johnson, Frank Kameny — at the periphery, but spends most of its time on Danny, and his adjustment to the city, and his angst-y flashbacks to life in Indiana, and his desire to attend Columbia University. It’s as if “Selma” had focused on a fictional white liberal character instead of Martin Luther King, Jr.

Even if the film’s whitewashed devotion to its handsome protagonist (Irvine is filmed like he’s Tab Hunter or Rock Hudson) was intended as a strategy to sell the story to heterosexual audiences who might otherwise shun a movie about a key moment in the struggle for LGBT rights — which is a problem unto itself — “Stonewall” is so generally sludgy that you can’t imagine it appealing to anyone, gay, straight or otherwise. The characters don’t resonate, so their day-to-day problems don’t really strike a chord, either. Nor does the film ever establish a strong sense of time (anachronisms abound, starting with the haircuts) or place (this Greenwich Village always feels more like the set it is than like a location).

By the time Danny gets to throw the first brick at the Stonewall — Irvine’s bellowing of “Gay Power!” prompted a wave of snickers at the press screening I attended — it’s nearly impossible to care about what’s happening on screen. “Stonewall” has clearly been designed to inflame our political passions, down to its closing crawl with statistics about homeless LGBT youth and the 70-plus nations worldwide where homosexuality is still illegal, but you’re more likely to walk out feeling bored and bewildered instead.