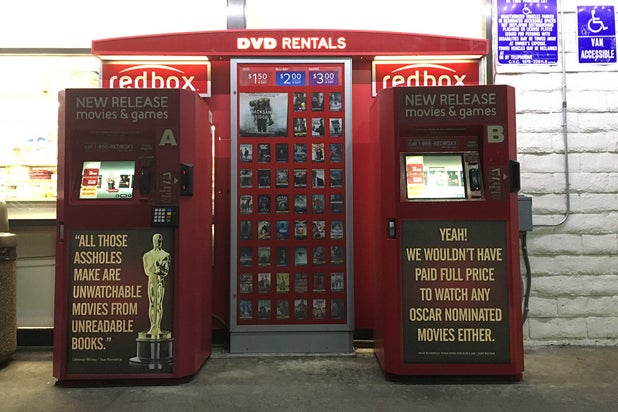 The artist put up his real-looking posters overnight, with a large concentration at the intersection of Hollywood and Highland, where the ceremony is held.

One poster, using a line from Quentin Tarantino’s “True Romance,” includes the quote, “All those a–holes make are unwatchable movies from unreadable books” next to an image of an Oscar.

Sabo also placed fake ads for video rental service Redbox — and even some replica kiosks — around Hollywood and in neighborhoods on L.A.’s Westside, where plenty of actors and showbiz execs live.

“I hardly ever go to movies anymore and, if there’s ever a movie I really want to see, I’ll just wait for it to show up in Redbox,” Sabo said in a statement provided to TheWrap. “I’ll admit, the reasons I do this are a bit petty. It’s my own little way to rebel by putting as little money possible into the big liberal Hollywood machine. Out of touch actors who rail against my political beliefs drove me to it.”

Sabo, who has been associated with right-wing personalities and causes (he produced artwork to promote Dinesh D’Souza‘s anti-Clinton documentary “Hillary’s America: The Secret History of the Democratic Party”), said he was tired of the disrespect he felt his political opinion — and those with similar perspectives — were receiving from the entertainment industry.

“Shia LaBeouf, Bryan Cranston, Cher, Madonna, Ashley Judd, Matt Damon, Ben Affleck,” he continued in the statement. “I could go on all day, have shot their mouths off long enough calling people like myself every vile name in the book, again and again, and again, and again. I used to really love movies and the occasional TV show but not so much these days. I ‘discount’ what goes on in them these days more than ever.”

He most recently rankled Hollywood with the Nate Parker posters he put up in August, at the time when the actor/director’s 1998 rape accusation — in which he was eventually acquitted — became public knowledge. Parker’s alleged victim later committed suicide.

Sabo told TheWrap last year that Parker’s imagery of a flag wrapped around his character, slave rebellion leader Nat Turner, like a noose was deeply offensive to him.

“I wouldn’t normally do something like this but [Parker] pissed me off right off the bat with the trailer and the poster,” Sabo said.