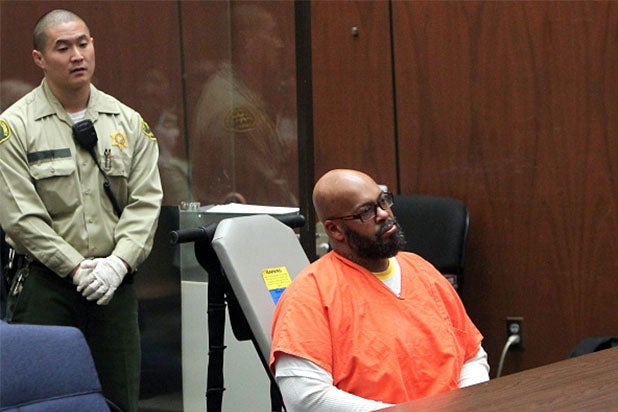 UPDATE, 10:13 am PT: The Associated Press reports that Suge Knight’s murder trial has been delayed, due to a change in lawyers for the Death Row Records co-founder.

Knight is now being represented by Thomas Mesereau, the attorney who defended Michael Jackson against child-molestation charges.

As a result of the change in attorneys, a judge rescheduled Friday’s hearing on Knight’s motion to dismiss his murder, attempted murder and hit-and-run charges to July 7.

Marion “Suge” Knight, the former rap mogul who allegedly hit two men with his car in January, is returning to court to try to get his murder charges dismissed.

The Associated Press reports that Knight’s Attorney Matt Fletcher filed a motion ahead of the former Death Row Records CEO’s Friday hearing in Los Angeles, arguing that the case should be dismissed because one of the victims, Cle “Bone” Sloan, refused to identify Knight in court.

During a hearing in April, Sloan testified that he’s “no snitch” and told the court that he would not play a part in putting Knight away.

“I don’t want it to get misconstrued that I told on this man,” Sloan said. “I’m no snitch. I will not be used to send Suge Knight to prison.”

Sloan added, “I can’t say this man ran me over.”

Also read: Ice Cube on Suge Knight's Murder Rap: 'I Hope You Get Out the Situation You're In' (Video)

Despite Sloan’s refusal to identify the 50-year-old Knight in court, prosecutor Cynthia Barnes argues that his statements made to detectives in conjunction with other evidence are enough to support the case.

Knight has pleaded not guilty to attempted murder and hit-and-run charges for hitting Sloan and Terry Carter with a pickup truck on Jan. 29 in Compton, California, killing Carter and injuring Sloan. He faces life in prison if found otherwise, due to prior convictions.

Knight’s trial is scheduled for July 7.