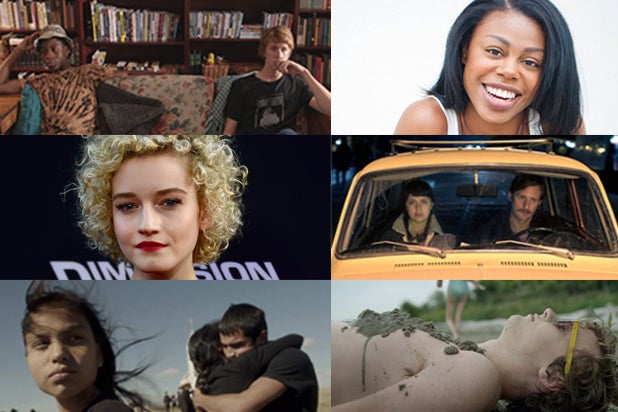 Michael B. Jordan in “Fruitvale Station.” Miles Teller and Shailene Woodley in “The Spectacular Now.” Oscar nominees Quvenzhané Wallis and Abigail Breslin in “Beasts of the Southern Wild” and “Little Miss Sunshine,” respectively.

All of those performances were once the talk of Sundance, where stars threaten to break-out each year. The 2015 edition of the frosty festival is no different, with no shortage of young stars poised to launch their careers in Park City and make a name for themselves in Hollywood. TheWrap talked to buyers and sellers alike before whittling down this list of 10 young actors with strong buzz heading into the festival.

Gail Bean, “Unexpected” – Bean plays a promising pupil who forms an unlikely friendship with her inner-city high school teacher (Cobie Smulders) as they each struggle to navigate their unexpected pregnancies. The actress has plenty of experience in short films but Kris Swanberg’s dramedy is her first big shot in the feature world. Hollywood is constantly seeking fresh young talent and if Bean draws strong reviews, expect major agencies to come calling.

Julia Garner, “Grandma” – Garner has been in a handful of movies thus far, including Sundance sensation “Martha Marcy May Marlene” and “The Perks of Being a Wallflower,” but she could find herself with some newfound heat following the festival. Word on the street is she holds her own opposite comedy legend Lily Tomlin in Paul Weitz‘s “Grandma,” which is no easy feat. When her character shows up at Tomlin’s door with an emergency that requires money, the two women proceed to kick up a storm all over town as they ask Grandma’s old friends and flames for the dough.

Lorenza Izzo and Ana de Armas, “Knock Knock” – These two exotic beauties play a pair of femme fatales who wreak havoc on the life of a happily married man, played by Keanu Reeves. Not only did Izzo previously star in Eli Roth’s “Green Inferno” but she married the director last fall, while de Armas will soon be seen alongside Edgar Ramirez and Robert De Niro in the boxing movie “Hands of Stone.” They may seem sweet and innocent in the photo above, but looks can be deceiving.

Lola Kirke, “Mistress America” – The younger sister of “Girls” star Jemima Kirke co-stars on Amazon’s “Mozart in the Jungle” and has already worked with David Fincher (which worked wonders for Dakota Johnson) but she gets her first big breakout feature role alongside Greta Gerwig in Noah Baumbach‘s latest, which has already been acquired by Fox Searchlight. Kirke plays a lonely college freshman in New York who escapes her boring college experience once she links up with her adventurous future stepsister who encourages her to chase her dreams … and steal cats?

Thomas Mann & RJ Cyler, “Me & Earl & the Dying Girl” – Mann has been building a solid resume over the past few years with starring turns in “Project X” and “It’s Kind of a Funny Story,” but he’s said to make a significant leap in this Indian Paintbrush production. Meanwhile, Cyler gets his big break here as Mann’s best friend, and if Alfonso Gomez-Rejon’s film can strike a chord with younger audiences, he could find himself on the verge of stardom. Olivia Cooke (“Bates Motel”) co-stars as their leukemia-stricken classmate who changes both of their lives.

Logan Miller, “Take Me to the River” – In Matt Sobel’s directorial debut, TV veteran Miller plays an artsy teenager who falls under suspicion after an incident behind closed doors with his nine-year-old cousin Molly and must come to terms with the truth on his own. It’s a complex turn in this unique family drama that offers no easy answers, and between this film, “The Stanford Prison Experiment” and his upcoming turn in Paramount’s “Scouts vs. Zombies,” Miller is already garnering attention in Hollywood circles.

Bel Powley, “Diary of a Teenage Girl” – Powley is coming on strong after wrapping Drake Doremus’ “Equals” and playing Princess Margaret in Julian Jarrold’s “Girls’ Night Out.” Set in San Francisco in the 1970s, this tale of sexual awakening follows a teenage artist who has an affair with her mother’s boyfriend, played by Alexander Skarsgard. There’s already buzz surrounding this adaptation of Phoebe Gloeckner’s graphic novel, which bodes well for a significant sale.

Melissa Rauch, “The Bronze” – Rauch could wind up being the breakout star of the festival with her foul-mouthed turn as an Olympic gymnast in “The Bronze,” which hopes to repeat the success of last year’s Opening Night selection “Whiplash.” Best known for playing Bernadette on CBS’s “The Big Bang Theory,” Rauch forger her own path to Sundance stardom by writing and executive producing “The Bronze,” which is a Duplass brothers production.

John Reddy & Jashaun St. John, “Songs My Brothers Taught Me” – Reddy and St. John may be non-professional actors but Chloe Zhao’s feature debut isn’t a one-off for either of them. The duo play half-siblings who embark on separate paths when the unexpected death of his father complicates his plans to leave the Pine Ridge Reservation in South Dakota. Like “Beasts of the Southern Wild,” this drama could surprise audiences who go in with an open mind regarding a community rarely seen on the big screen.

Hays Wellford & James Freedson-Jackson, “Cop Car” – On paper, there’s not too much to go on here, but I’ve got a hunch about these two young boys who get more when they bargained for when they take a seemingly abandoned police car for a joyride despite the fact they can barely reach the pedals. The kids find themselves one-degree from Kevin Bacon, who stars as a corrupt small-town sheriff who engages them in a deadly game of cat-and-mouse they don’t understand.

BONUS ACTORS: There are several veteran actors who aren’t really breakouts but deserve special mention, so pay attention to Sarah Silverman’s dramatic turn in “I Smile Back” and Ben Mendelsohn’s leading role in “Mississippi Grind.”