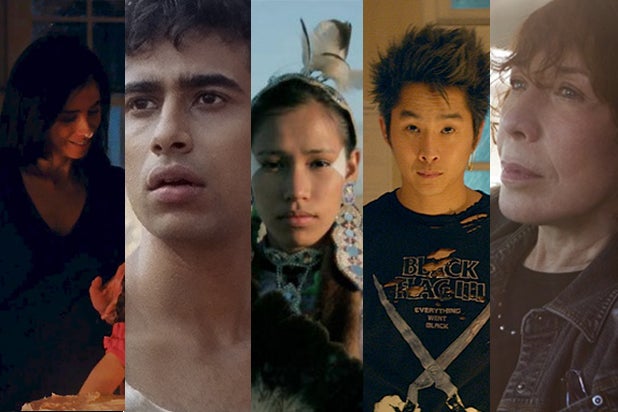 Those up in arms over Hollywood’s limited roles for women and minorities should be excited for the diversity of the 2015 Sundance Film Festival, which kicks off Thursday with no shortage of films that address the broad range of human experience, while renewing the festival as a key launch platform for awards season hopefuls.

For all the talk of work drying up for over-40 actresses, they’re well represented this year in Park City between “Lila & Eve” with Jennifer Lopez and Viola Davis, “Strangerland” with Nicole Kidman and “I Smile Back” with Sarah Silverman. Meanwhile Cynthia Nixon mothers Christopher Abbott and Saoirse Ronan in “James White” and “Stockholm, Pennsylvania,” respectively.

Complimenting those women is the unexpected, welcome presence of veteran actresses who are destined to shine at this year’s festival. This year’s lineup offers the world premieres of “Grandma” with Lily Tomlin, “I’ll See You in My Dreams” with Blythe Danner, June Squibb and Rhea Perlman and “A Walk in the Woods,” which finds Emma Thompson and Mary Steenburgen flanking Sundance kid Robert Redford and Nick Nolte.

Young women also populate this year’s lineup, though they’re forced to deal with unusual situations such as Stockholm syndrome (“Ronan”), supernatural stalkers (Maika Monroe in “It Follows” and Chloe West in “Hellions”), sleeping with their mother’s boyfriends (Bel Powley in “Diary of a Teenage Girl”), getting pregnant in high school (Gail Bean in “Unexpected”) and leukemia (Olivia Cooke in “Me and Earl and the Dying Girl”).

Women aren’t the only group bucking Hollywood trends. While the industry was again accused of having a diversity problem following this year’s Oscar nominations, which snubbed “Selma’s” David Oyelowo and nominated 20 white actors,  the indie film scene at Sundance is awash with actors of color.

In recent years, Sundance has put itself back on the awards map with “Boyhood,” “Whiplash,” “Beasts of the Southern Wild,” and “Fruitvale Station,” with the first two Best Picture nominees at this year’s Oscars.  The festival is increasingly viewed as a launch platform for independently-produced awards contenders that might get lost in the shuffle at Cannes or Toronto. It’s always interesting to see which film escapes with the highest awards profile, as you can never quite tell before the festival.

“Sundance is an important launchpad that frames the conversation for many great films,” said Graham Taylor of WME Global, which sold awards contenders “Whiplash,” “Fruitvale Station” and “Beasts of the Southern Wild” in recent years. “In this day and age it’s difficult to get people to pay attention to a new film without a branded filmmaker or major cast because there is so much great content and more avenues than ever to consume it.  We need festivals like Sundance to create word of mouth and lay the groundwork for impactful marketing campaigns around these projects.”

UTA’s Rena Ronson said it’s not unusual for Sundance to be used as a launch platform for potential awards titles. “There have always been films that emerge from Sundance, partially because they’re very character-driven and feature such compelling roles, from ‘Whiplash’ to ‘Beasts of the Southern Wild,’” said Ronson, whose agency is representing at least one film in every section except the Park City at Midnight lineup.

“It’s really a launch pad for smaller films that typically wouldn’t have a significant life without Sundance,” said one Sundance veteran who works at an agency. “Most of the films on that stage command attention from the press and the public, but everywhere else they’d be overshadowed by bigger movies with bigger stars and filmmakers. What Sundance does is collect the industry and the press, and it keeps out the bigger movies that are scene-stealers. There’s no “Wild” or “Foxcatcher” or “Nightcrawler” at Sundance. The festival won’t program them because they steal too much thunder, so we’re forced to work within this pool so everything feels bigger there.”

The renewed interest in independent film is expected to lead to a healthy marketplace in 2015. Past years have seen new distributors launch at Sundance but the most recent wave of emerging buyers made a splash in Toronto, including Broad Green Pictures, Saban Films and Andrew Karpen’s Bleecker Street.

“We hope people will be buying, as there’s a lot more competition,” said Ronson. “I think people are looking more for those auteur-driven commercial movies. The marketplace is healthy and the opportunities for release have grown — not just because of the increase in distributors, but the ways films are distributed. Multi-platform opportunities have expanded as well and there has been great success in the TV world with Amazon and Netflix, so it’ll be interesting to see if they do any business on the feature side because that’s the next thing — the digital world coming into the theatrical space,” predicted Ronson.

One sales agent isn’t counting on Amazon for acquisitions despite its announcement to enter the theatrical space: “People talk a lot but Sony Classics, Fox Searchlight, Radius-TWC and A24 do a lot. We try to measure the market by actual distribution activity as opposed to stated goals in announcements,” said that agent.

Another company that sales agents regard with curiosity this year is IFC Films, following the success of “Boyhood.”

“‘Boyhood’ is a nice thing for IFC because it allowed the company to show what it can do with that type of movie, and it’s going to elevate the type of films they’re looking for,” an agency insider told TheWrap. “They’ve been sitting in that day-and-date/limited release space for a while but now they’ve shown they can create an opportunity for non-traditional movies.”

“‘Boyhood’ was financed as an experiment by IFC a decade ago,” said the insider.  “If Fox Searchlight or Focus or Sony Classics would’ve paid a good number for it, I think they would’ve sold the film. They didn’t have a great screening at Sundance last year. Everyone thought it was an art film. IFC released it themselves because they couldn’t do much better. Now it’s the best thing that ever happened to them.”

One veteran sales agent told TheWrap of a growing trend — the decision to pre-sell movies in advance of festivals.

Those three high-profile stars will compete for attention with Kristen Wiig, Saoirse Ronan, Sam Rockwell, Cobie Smulders, Adam Scott, Jemaine Clement, Tye Sheridan and Cynthia Nixon, all of whom have multiple movies at Sundance. However, it’s the Duplass brothers who may be the homecoming kings of this year’s festival thanks to the commercial opening night selection “The Bronze,” Patrick Brice’s “The Overnight” starring Adam Scott and produced by his wife Naomi Scott, and Sean Baker’s prostitute drama “Tangerine,” as well as the animated series “Animals,” which could prove a bellwether for independently-produced television if it lands distribution during the festival.

The Documentaries and Beyond

Of course, there are plenty of lighter documentary subjects including Kurt Cobain, Chuck Norris, Marlon Brando, Evel Knievel and Tig Notaro, while laughter gets a thorough examination thanks to Kevin Pollak’s humor documentary “Misery Loves Comedy” and “Drunk, Stoned, Brilliant, Dead,” which follows the writers behind National Lampoon.

Slamdance is even getting in on the documentary action this year with “Dennis Rodman’s Big Bang in Pyongyang,” which could be a slam dunk for CAA given North Korea’s role in the news of late, as well as films about WWF wrestler Jake “The Snake” Roberts and America’s beloved superhero Batkid (“Batkid Begins”). Other titles getting buzz out of Slamdance include the horror movie “Ratter” starring Ashley Benson and Dr. God’s vampire comedy “Bloodsucking Bastards,” which opens the festival and will surely compete with Sundance’s “Turbo Kid” to be the bloodiest movie in Park City this month.

Sundance is also home to HBO’s upcoming six-part documentary series “The Jinx: The Life and Deaths of Robert Durst“ and its New Frontier section is showcasing two immersive virtual reality experiences from Felix & Paul — jam session “Strangers With Patrick Watson” and “Wild: The Experience,” which hails from the Fox Innovation Lab and leads viewers down the same Pacific Crest Trail that Reese Witherspoon walks in the Fox Searchlight film.