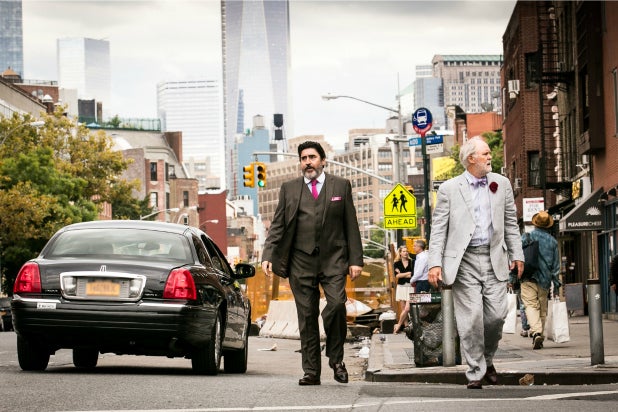 No one had expected that Utah would come in earlier than, say, Number 48 on the list of U.S. states that would allow same-sex marriage, but a recent court decision (currently being contested) made this very red state, for a little while anyway, a celebratory place for gay and lesbian couples looking to tie the knot.

And while the courts did plenty to bring gay marriage to Utah, the Sundance Film Festival is certainly playing its part, with three films showcased on Saturday featuring same-sex nuptials in varying contexts.

The highest profile of these was no doubt Ira Sachs’ eagerly anticipated “Love Is Strange,” starring John Lithgow and Alfred Molina as longtime companions who find themselves, not long after saying “I do,” forced to live separately when they lose their Manhattan apartment.

Sachs, coming off the acclaim of the much grimmer “Keep the Lights On,” has probably never enjoyed this much of a marquee cast (the ensemble also includes Marisa Tomei and Cheyenne Jackson), but if you think he’s gone soft and made a film that’s merely cute and accessible, think again. (And if the title led you to expect Mickey & Sylvia on the soundtrack, get ready for some lovely Chopin selections instead.)

Ben (Lithgow) and George (Molina) find themselves having to give up their co-op after news of their wedding leads to George losing his gig as a choir director at a Catholic school. George moves in with the hard-partying gay cop neighbors, while Ben literally bunks with his nephew’s family.

It’s a graceful and witty film about aging and the awkwardness of being an extended houseguest, and anchoring everything are the performances by the two leads, who are naturally affectionate throughout. So often when straight actors take on a gay role, you can feel them handling it with tongs, but Lithgow and Molina get the easy rhythm that develops between two people who have spent decades together. Even when they aren’t touching, you can feel their bond, to the point where each conveys a feeling of absence when the other isn’t around.

“Love Is Strange” doesn’t travel a predictable path, and some mainstream audiences may find themselves put off by some of the climactic moments, but it’s a smart and very heartfelt love story.

Speaking of love stories, the documentary “The Case Against 8” (scheduled to premiere on HBO in June) is more than the tale of two couples who want to be married; it’s a valentine to the Constitution and to the American judicial process. Filmmakers Ben Cotner (a former exec at Paramount and current one at Open Road) and Ryan White (“Good Ol’ Freda”) enjoyed unparalleled access to the five-year court case against Proposition 8, a ballot initiative in California that overturned a state supreme court decision that allowed same-sex couples to marry.

Now that we know the American Foundation for Equal Rights’ efforts paid off, it’s easy to think that this entire battle would inevitably lead to victory, but the film reminds us that even LGBT advocates were dubious at first — wait a few years for public opinion to come around, said some, while others were suspicious that Ted Olson, who represented the GOP in Bush v. Gore, would be handling the case with his 2000 opponent David Boies.

Kudos to editor Kate Amend for skillfully interweaving the legal part of the storytelling with the portraits of the four defendants: Berkeley moms Kris Perry and Sandy Stier, and Burbank-based Jeffrey Zarillo and Paul Katami. “The Case Against 8” appeals both to the emotions and to the intellect, and it’s bound to become a cornerstone among the ongoing representations of the LGBT civil rights movement.

Also fighting that good fight is actor George Takei, and the charming documentary “To Be Takei” shows us that there’s a lot more to the actor than just playing Mr. Sulu. Survivor of a Japanese-American internment camp, L.A. city council candidate, Howard Stern foil and Facebook star, Takei has brilliantly reinvented himself over and over again.

(And yes, we get to see him get married to longtime partner Brad.)

Much like “Joan Rivers: A Piece of Work,” “To Be Takei” takes us up close and personal with a hard-working (there’s even the requisite filled-in-appointment-book scene) pop culture icon who has survived life struggles and discrimination and emerged late in life more popular than ever. Oh my, indeed.

On the non-gay-marriage beat, I also checked out the new Irish comedy “Frank,” starring Domhnall Gleeson (“About Time”) as a would-be musician who gets dragooned into playing keyboards for an avant-garde combo with an unpronounceable name and a lead singer (Michael Fassbender in the title role) who is never without a giant head mask.

There’s a familiar eccentricity about the film, from the band’s arduous recording process to a singularly disastrous debut at South by Southwest, but what’s most annoying about “Frank” is that we follow Gleeson’s character, who is treated like crap by most of Frank’s bandmates, and then by the end of the movie, we’re supposed to admire the band’s integrity and dislike Gleeson’s attempts to publicize their work.

A strong cast (which also features Maggie Gyllenhaal, Scoot McNairy and Tess Harper) does fine work for director Lenny Abrahamson, but ultimately “Frank” feels as pretentious and snotty as Gyllenhaal’s theremin-playing harridan. (If your idea of a dream band is Sonic Youth fronted by Jim Morrison, however, you might like the film better than I did.)