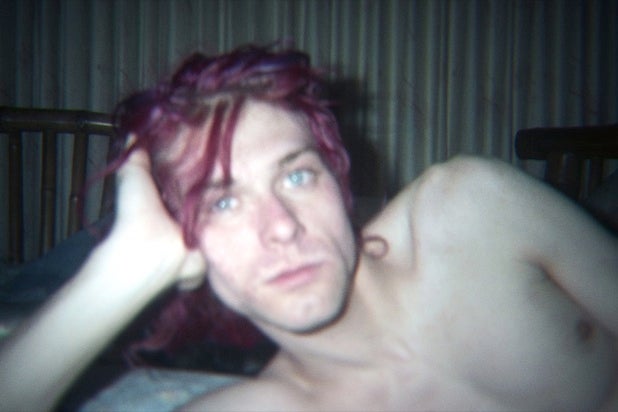 Kurt Cobain and Marlon Brando, two cultural icons from vastly different eras and arenas, took center stage at the Sundance Film Festival on Saturday, with the back-to-back world premiere of documentaries that drew heavily on words and footage from the rock and acting legends.

“Kurt Cobain: Montage of Heck” and “Listen to Me Marlon” could scarcely be more different. The former is a blistering, raucous and unwieldy look at the Nirvana frontman, the latter an elegant meditation on the star of films from “On the Waterfront” to “The Godfather.” But the strength of both films lies in the material from which they were assembled, and the access the filmmakers had to the inner lives of subjects who were profoundly talented and just as uneasy with the fame that talent brought them.

The Cobain film was made for HBO by Brett Morgen, whose previous films include “The Kid Stays in the Picture” and the Rolling Stones doc “Crossfire Hurricane.” Cobain’s parents and his widow, Courtney Love, gave Morgen unfettered access to a treasure trove of previously unseen footage, from childhood home movies to drawings, sound collages, Super 8 films and intimate footage of Cobain and Love with their young daughter in the final months before the singer killed himself.

The result is a bold, generous portrait of a man who was clearly a tortured teenager before he was a tortured artist and a reluctant icon. Parts of it are shockingly personal, including a tape in which Cobain sums up his childhood feelings of being unwanted, and the footage with Love.

It is an authorized portrait but not a rose-colored one – and when he introduced the film at the Marc Theatre on Saturday afternoon, Morgen took pains to point that out. “To anybody who thinks there’s an agenda in this film, f— off,” he said. “The only agenda in this film was Kurt Cobain. That’s why we made the film: for Kurt.”

With the volume in the many concert sequences cranked to 11, a running time of more than two hours and a generous helping of Cobain’s artwork and scrawled notebook entries along with effective animated sequences, the film is a super-sized portrait of a super-sized talent.

It is clearly made largely for fans and will best be appreciated by fans, but it is also an intimate portrait – at times a shockingly intimate one – of an artist who couldn’t keep from being a star, but couldn’t handle it once he became one.

“There was nothing that we thought was too intimate,” said Morgen in the post-screening Q&A. “But there was certainly a very heavy moral responsibility.”

Showtime’s “Listen to Me Marlon,” which premiered earlier in the afternoon at the Prospector Square Theatre, is a far quieter movie; while Brando’s performances were often physical, visceral and filled with rage, Stevan Riley’s film is quiet and meditative.

It too is based around previously-unseen material – or, in this case, previously unheard material, in the form of Brando’s own audio recordings in which he talks about his upbringing and his philosophy of acting and of life. This is a contemplative, thoughtful Brando, and Riley uses his words as the basis for a fascinating but languid exploration of his subject protean talent and strange career.

The film makes great use of footage from Brando’s films, and of offscreen footage as well: There are priceless sequences in which he teases and flirts with female reporters, and revealing ones of him frazzled after negotiating the red carpet at the “Guys and Dolls” premiere, and at ease in his beloved Tahiti surrounded by natives who don’t care that he’s a movie star.

Equally arresting are the film’s opening and closing sequences, in which Brando talks about having his head digitally scanned, and then we see an eerie digitized Brando head reciting the “tomorrow and tomorrow and tomorrow” soliloquy from “MacBeth” and Shakespeare’s “Sonnet 29” (“When, in disgrace with fortune and men’s eyes”) .

In the context of fascinating moments like that, it’s jarring that the film occasionally shifts into tabloid-style coverage of events like the suicide of Brando’s daughter and the arrest of his son for shooting another man in Brando’s home. Those sequences up the energy, but seem out of place in what is otherwise a gentle portrait of an artist.