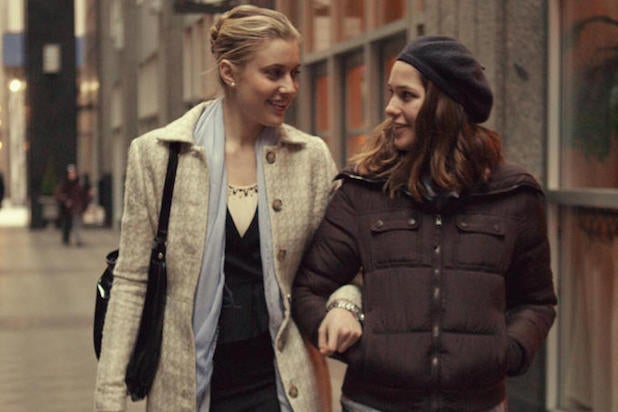 Noah Baumbach and Greta Gerwig have been a match made in indie-film heaven since “Greenberg” in 2010, and the Sundance Film Festival premiere of “Mistress America” this weekend showed the two fully in sync once more.

By turns wacky, amusing and touching, the new film isn’t as focused as “Frances Ha,” the last film directed by Baumbach, starring Gerwig and co-written by both. But the Fox Searchlight project is one of the delights of this year’s festival, and one of the most satisfying, sure-handed and touching  of the many comedies grabbing attention.

The film starts with Lola Kirke as Tracy, a new college student and aspiring writer uneasily adjusting to life at her New York City school. Urged by her mother to call up her stepsister-to-be, she phones Brooke (Gerwig), an inspiring and at least partly disastrous whirlwind of manic energy whose life seems to be enormous fun even if it’s nowhere near as thrilling as she insists it is.

We’ve seen Gerwig in similar roles before — scattered, ditzy, covering insecurity with bravado — but Brooke feels like a fresh creation, a character who is endearing, fascinating and very funny, from her choice of abode (a commercial space in Times Square) to a conversational mode that turns ADD into an art form.

Also Read: Robert Redford Weighs in Hollywood’s Diversity Problem: It ‘Is What Moves the Ball for Me’

It’s the kind of performance, and the kind of character, that could easily hijack the movie and dominate everyone around Brooke. But Kirke more than holds her own as the emotional heart of the film.

“Mistress America” is slapstick with heart, a character study that turns into a goofy romp and then finds a beautiful emotional tone at the end. It’s very funny and truly moving, a rare combination but always a welcome one.

In a Q&A that followed the Sunday-morning screening, Baumbach said he was inspired by ’80s movies like Jonathan Demme‘s “Something Wild,” Martin Scorsese‘s “After Hours,” Woody Allen‘s “Broadway Danny Rose” and Albert Brooks’ “Lost in America,” comedies unafraid to shift tone. But when he and Gerwig first began writing, he said, they didn’t envision the movie they would end up making.

Also Read: Sundance: Scott ‘Kid Cudi’ Mescudi, David Call on ‘James White': ‘We Made Out a Bunch of Times’ (Video)

“Even less than with ‘Frances Ha,’ we didn’t know what we were writing when we started it,” he said.

In fact, added Gerwig, her character wasn’t even part of the original conception. “We were working on something else, and the character of Brooke kind of entered it,” she said. “We loved the idea of her — the idea of a girl who lives in Times Square.”

Kirke, meanwhile, had to do repeated auditions to persuade Baumbach and Gerwig that she could play a character far needier and less confident than the actress is in real life.

“Lola is very sure of herself,” said Gerwig. “Before the scene where Tracy first sees Brooke’s apartment and says, ‘It’s so stylish’ as soon as she walks in the door, Lola asked me, ‘Why would she say that? She hasn’t even seen the place.”

She laughed. “At that age, I was so insecure that I would have been telling anybody ‘great place!’ before I even walked in the door.”