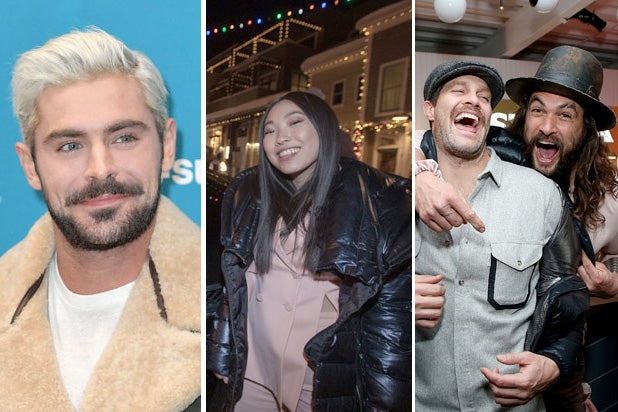 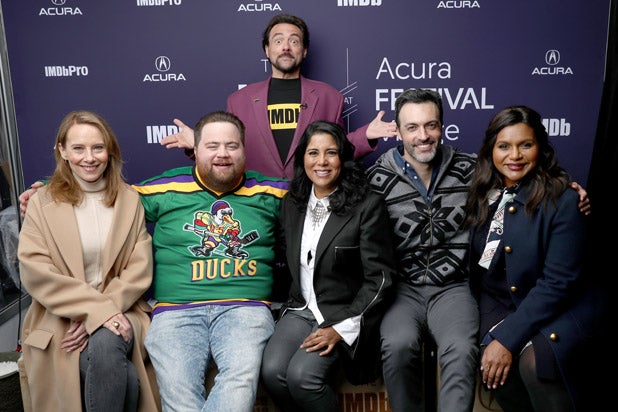 Photo courtesy of The IMDb Studio at Acura Festival Village, Getty Images for IMDb
Mindy Kaling is all smiles at The IMDb Studio at Acura Festival Village, along with her "Late Night" cast of Amy Ryan, Paul Walter Hauser, Nisha Ganatra and Reid Scott. "Late Night," written, produced and starring Kaling and Emma Thompson and directed by Nisha Ganatra, sold to Amazon Studios for an eye-popping $13 million. 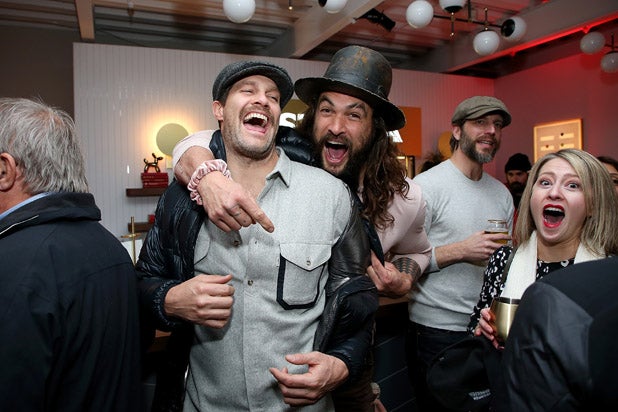 Photo by Phillip Faraone/Getty Images for Stella Artois.
Geoff Stults and Jason Momoa clowned around at Stella's Film Lounge during the bash for the documentary "David Crosby: Remember My Name," along with the singer himself and renowned Hollywood music geek Cameron Crowe. Parties went off every night at Stella, with stars like Milla Jovovich, Peter Sarsgaard, Tony Revolori and Danielle Macdonald joining in for the dancing. 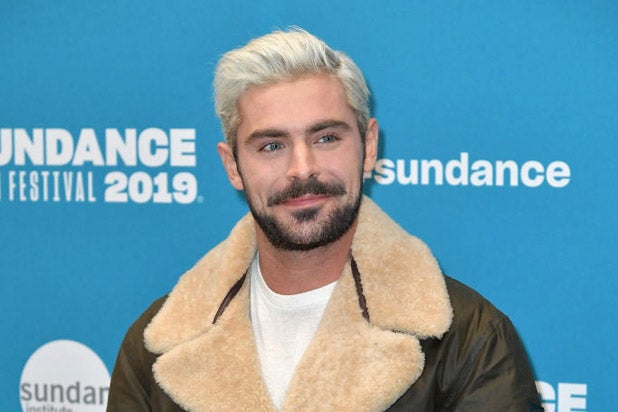 Photo by Neilson Barnard/Getty Images
No one at Sundance could quite get the name right for "Extremely Wicked, Shockingly Evil and Vile," but pretty much everyone who saw Zac Efron's turn as Ted Bundy agreed he was startlingly good as the self-centered psychopath who tried to use good looks and charm to get away with murder. Was his blond hair at the red carpet premiere a way of distancing himself from his horrific character? If so, we don't blame him. 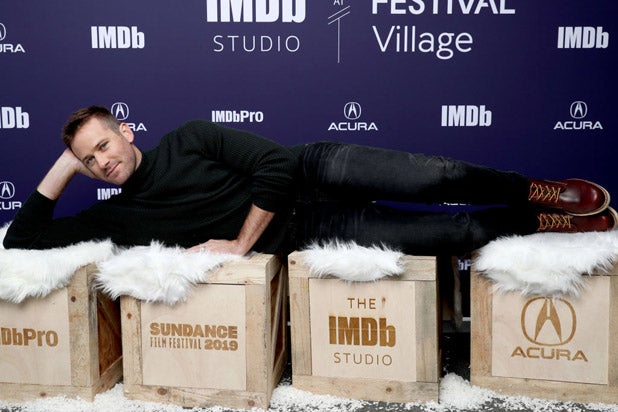 Photo courtesy Rich Polk/Getty Images for IMDb.
Armie Hammer wins the "stretching out on sheepskins" crowd-pleasing award at The IMDb Studio at Acura Festival Village, while making sure Sundance knows his next flick is a frightfest called "Wounds." He promoted the film, which features lots of creepy crawlies, by leaving small plastic cockroaches all over Park City.

TAO Park City popped up for its 11th year at Sundance, with late-night dance parties fueled by Stella Artois beer and Casamigos tequila. Michael B. Jordan skipped the lines on Friday night, along with Shailene Woodley, Kiki Layne, Lena Waithe and a big crowd of VIPs. If they stayed late enough, they caught rapper G-Eazy do an unexpected set, complete with ski-bunny go-go dancers. Hmm, maybe it wasn't all that impromptu? 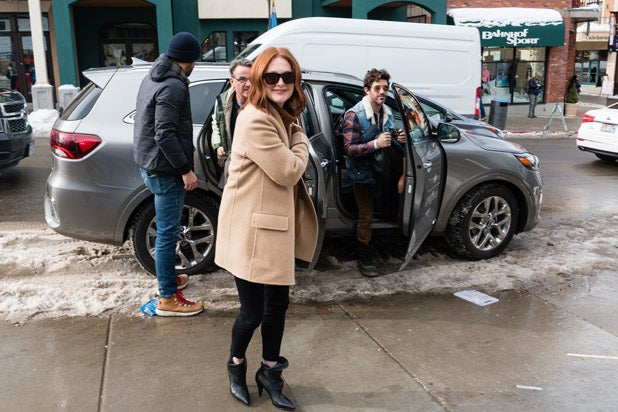 Photo courtesy Kia Telluride Supper Suite by Greene St. Kitchen and Photagonist.
Julianne Moore tooled up and down Main Street as she made the rounds talking up "After the Wedding," along with Bart Freudlich, who's not only her director on the film, but her hubby, too. 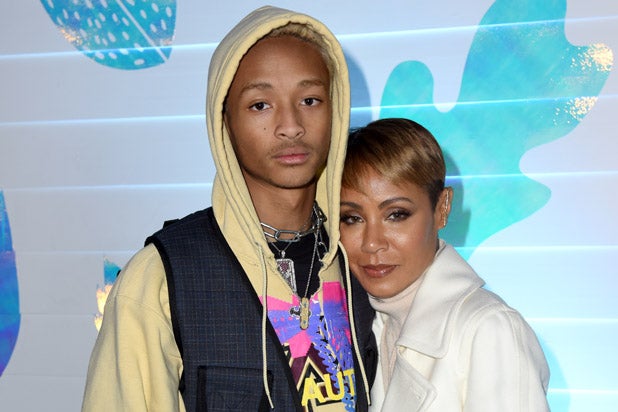 Photo courtesy Vivien Killilea/Getty Images for AT&T and DIRECTV.
Jaden Smith looks relaxed at the "Hala" party. He's with his mom, Jada Pinkett Smith, who executive produced the drama about a Muslim teenage girl figuring out her place in the world. 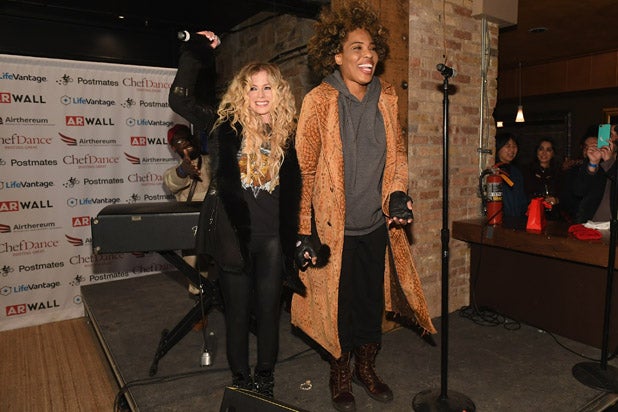 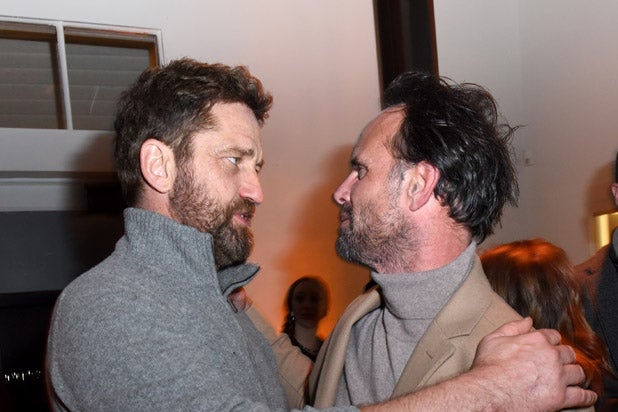 Photo courtesy Vivien Killilea/Getty Images for AT&T and DIRECTV.
It's a a battle of the beards between Gerard Butler and Walton Goggins. The hirsute pair hugged it out at the "Them That Follow" party held at the DirecTV Lodge presented by AT&T. 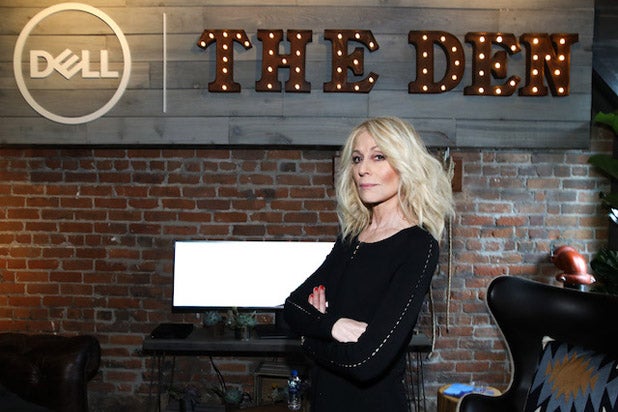 Photo courtesy Jonathan Leibson and Marie Claire
Judith Light has undeniable power, even first thing Sunday morning at the Marie Claire magazine's "Power Breakfast" held at The Dell Den with the women of "Before You Know It," Light's Sundance 2019 entry. Director Hannah Pearl Utt and scriptwriter Jen Tullock also got up early to join the conversation. 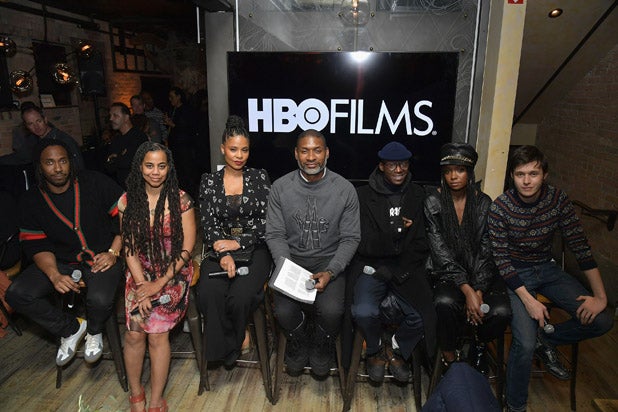 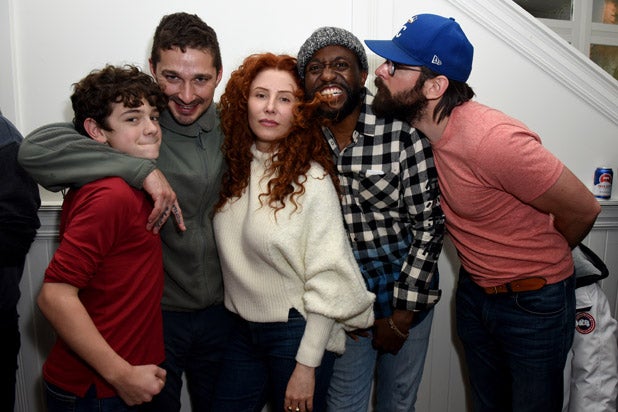 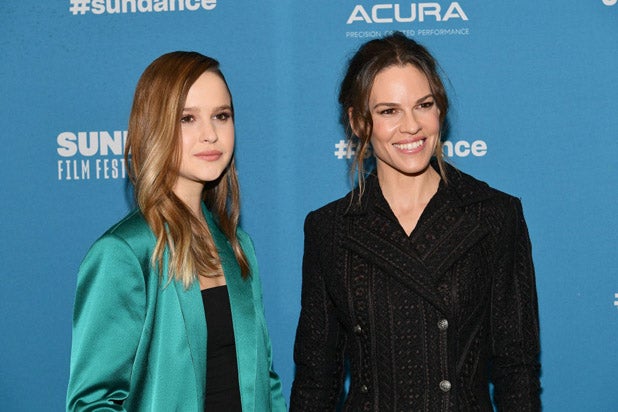 Clara Rugaard and Hilary Swank brightened up the "I Am Mother" premiere at the Eccles Center Theatre, joined by the robot who's at the center of their sci-fi flick directed by Grant Sputore. But we really want to know if that Weta Workshop contraption can say "Klaatu barada nikto"? 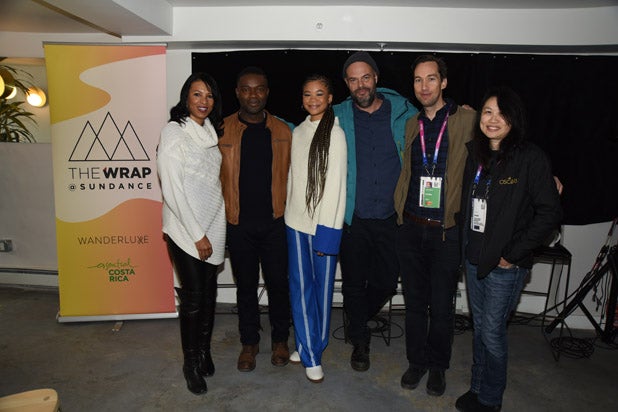 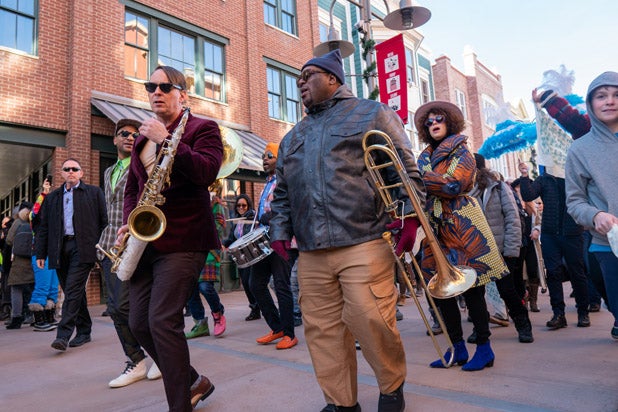 Photo courtesy of GLOW for #MakeChangeSeries at Salesforce Music Lodge.
The Sundance musical celebrations took to the streets as Arcade Fire's Régine Chassagne and Win Butler enlisted New Orleans' favorite sons, The Preservation Hall Jazz Band, to second line it to the #MakeChangeSeries at Salesforce Music Lodge, where they put on a private concert for a lucky crowd. Comedian Reggie Watts joined the raucous fun, too. 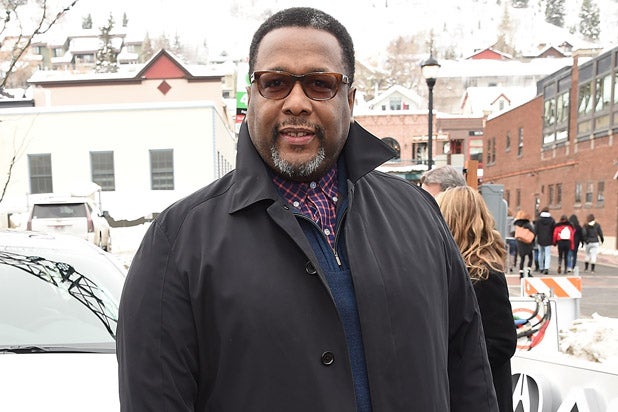 Photo by Michael Kovac/Getty Images for Acura
New Orleans native Wendell Pierce had to appreciate the second line's appearance. He came to Park City in support of his kinky new film "Piercing." 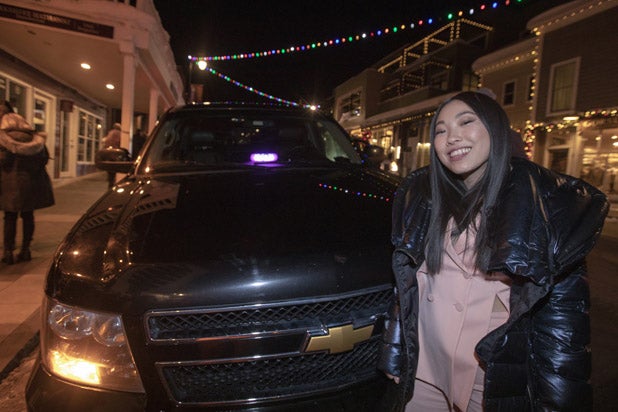 Awkwafina ("The Farewell") bounced around Sundance with Lyft, the official ride share partner of the festival, along with Nico Santos, Mj Rodriguez, Tony Hale and a slew of others who knew better than to drink and drive – or drink and walk on icy sidewalks! 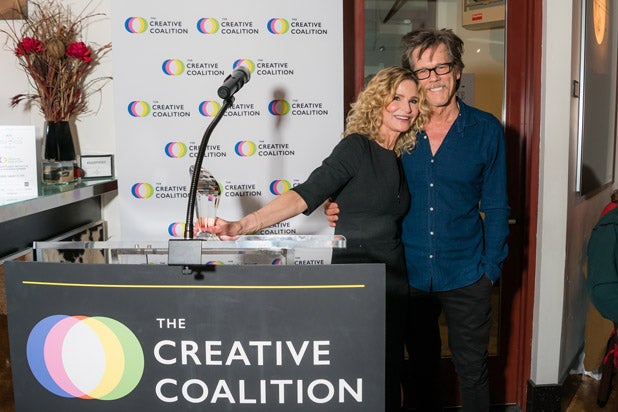 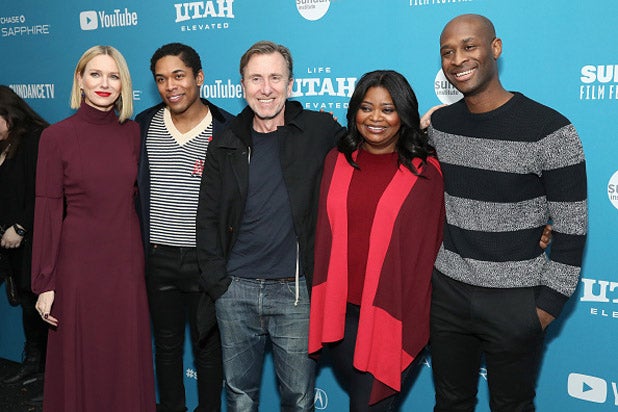 Powerhouse Hollywood players Naomi Watts, Tim Roth and Octavia Spencer turned out for the premiere of their new flick "Luce," along with up-and-comer Kelvin Harrison Jr. (who plays the title character) and writer-director Julius Onah. Watts also has "The Wolf Hour" premiering at Sundance this year, thus all those clothing changes. 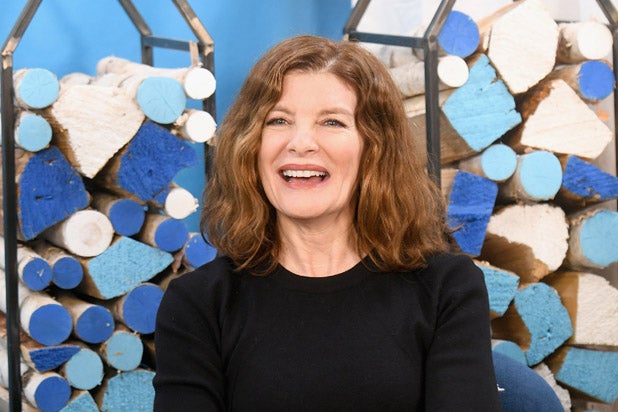 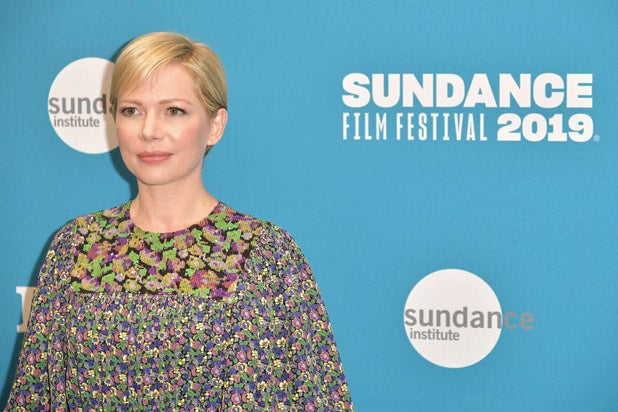 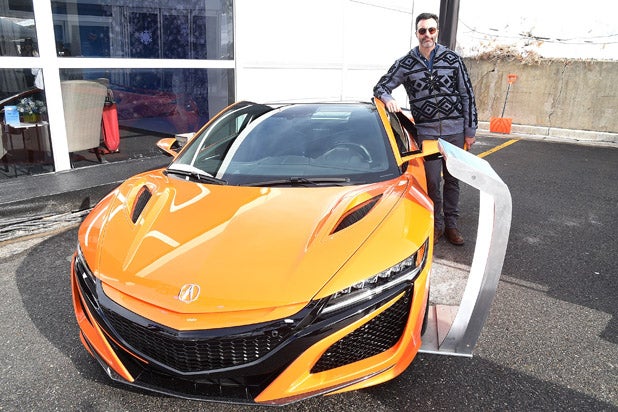 Photo courtesy Michael Kovac/Getty Images for Acura and the Acura Festival Village.
"Veep" star Reid Scott may be hard to recognize with his new beard, but we all can identify with the lust in his heart as he contemplates this sweet ride at the Acura Festival Village. Scott hit town to help make Mindy Kaling's "Late Night" the toast of the fest.
x
Looks like you're enjoying reading