The traditional Super Bowl media day circus transformed into a “Super Bowl 50 Opening Night” extravaganza on Monday, as the Denver Broncos and Carolina Panthers were bombarded by thousands of reporters.

Filling the SAP Center in San Jose, California, ahead of Sunday’s game in Santa Clara, players were asked a whole world of questions, ranging from serious inquiries — such as Peyton Manning’s possible retirement and recent plague of HGH accusations — to the absurd, like which superhero would you be, who should play you in a movie, who is your favorite “Full House” character … and even “will you cat sit for me?”

Those posing the questions were just as outlandish as what they asked, with sports media professionals being joined by superheroes, kids and even Miss Universe Pia Alonzo Wurtzbach, who was hired by “Inside Edition” as a correspondent for the night. 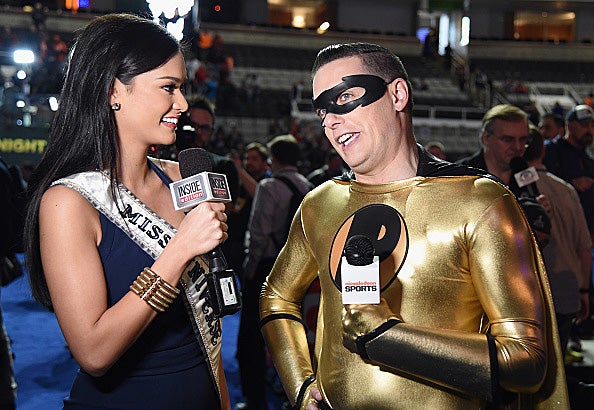 See TheWrap’s most memorable moments below.

Peyton Manning talks retirement rumors, thanking Tom Brady and Bill Belichick
Sunday may or may notof Manning’s storied career, but he’s not quite decided yet. “I don’t know the answer to that question right now,” the star QB told NFL Network’s Marshall Faulk when asked if he plans to retire. “I haven’t made my mind up about retiring.”

He later said his current goal is to “stay in the moment, focus on the task in hand and just deal with this week. I just try to focus on that one week and not look too far ahead — obviously we have a big task at hand with the Panthers in the Super Bowl.”

As for the AFC Championship game on Jan. 25 when the Broncos beat the New England Patriots to win their spot in the Super Bowl, Manning revealed that he took a moment to thank both Tom Brady and coach Bill Belichick for years of memorable match ups after. “I wanted to tell both of them I really have enjoyed these games — they have been a part of my football life,” he said. “Brady is going to play until he’s 70, Belichick is going to coach until he’s 90. Maybe we will play in a championship again, but I took the time to shake their hands and tell them that.

“This could be it, maybe it will be. Maybe I will play in 10 more AFC Championships; if I do, eight of them will probably be against the Patriots,” Manning continued. “I don’t know if it is having kids or getting old, but I get more emotional at times — and that was an emotional game.” 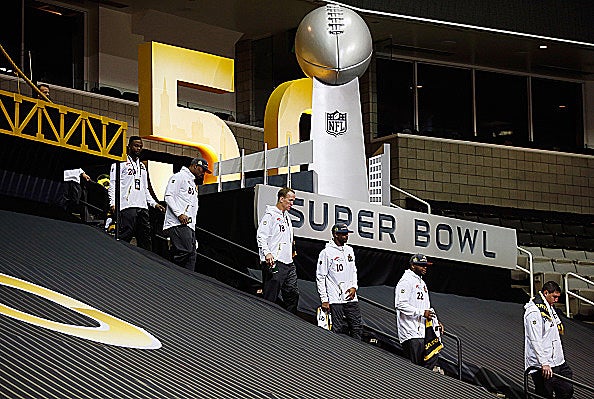 Peyton Manning and the Denver Broncos

Manning says the investigation into HGH accusations will result in “a big fat nothing”
Manning has vehemently denied Al Jazeera’s report linking him to performance-enhancing drugs, and he emphasized that in blunt language Monday when asked about the impending NFL investigation.

“I know exactly what they are going to find — a big fat nothing,” he said. “I know the rules of the NFL, it’s been completely fabricated and is complete junk. Whatever they have got to do, I welcome it 100 percent.”

"There's no doubt in my mind that [@CameronNewton] is gonna be the MVP." – Peyton Manning #SBOpeningNight #SB50 https://t.co/IfCfnpoUwy

Peyton is already voting for Cam Newton as MVP
The veteran Broncos quarterback was MVP of Super Bowl XLI, when his Indianapolis Colts beat the Chicago Bears in 2007, but he’s already given this year’s crown to the competition.

“There’s no doubt in my mind that Cam Newton is gonna be the MVP of the Super Bowl,” he said, referring to the Carolina Panthers quarterback. “You don’t go 17-1 without being awesome.” Meanwhile, Newton said he’s not dwelling on who gets the MVP yet, “my mind is elsewhere.”

Cam Newton is asked to cat sit — by an aspiring superhero
Media Day notoriously brings out colorful characters, and Monday did not disappoint. Nickelodeon host  Jeff Sutphen [top with Miss Universe] dressed in a gold and black superhero costume to give Newton a matching shirt, which will go well with his insane Versace pants from Sunday.

However, there was a catch. “You’re still cat sitting for me on Saturday, right?” he asked the quarterback. Sadly, Newton will be working this weekend and had to politely decline. “I can’t, we’ve got curfew,” he replied.

That's Josh Norman under there. pic.twitter.com/FfNciW8iZK

Josh Norman rocks a Lucha mask
If he ever gets tired of football, Carolina cornerback Josh Norman might have a career in Mexican wrestling after he was gifted a Panthers Lucha mask.

“For all my Spanish guys out there … I like it. I might wear it pre-game. I am going to answer all questions like this,” he said, while wearing the mask.

As for Odell Beckham Jr., who he infamously had angry altercations with when the Panthers played the New York Giants late last year, “I don’t want to talk about that guy right now,” he said when asked about his nemesis.

Is Manning going from the Broncos to the rodeo?
There’s been reports that Manning told Belichick that the Super Bowl was “going to be his last rodeo,” and in a confusing interaction with one reporter on Monday, Peyton claimed he was going to join a rodeo.

“I am going to participate in rodeos now, I have the lasso and cowboy hat. Right after this game, I am going into rodeos and will watch that film ‘8 Seconds’ [starring Luke Perry],” he quipped. 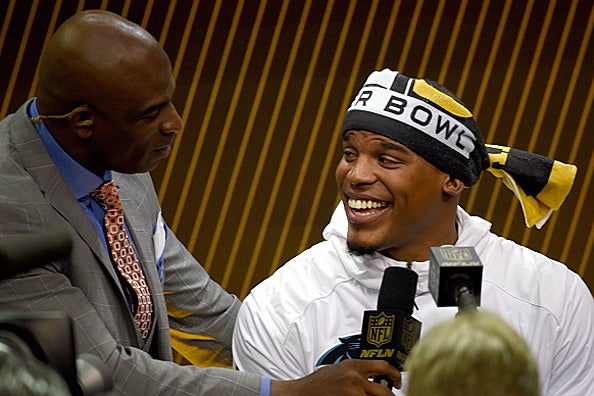 Gatorade towels — who wore it better
Gatorade was the key sponsor of Media Night — and it showed. Manning repped Gatorade hard, making a promotional fashion statement by throwing towels for the beverage brand over his shoulder like a scarf. Meanwhile, Newton showed off his savvy fashion sense by tying his towel around his head as a bandana.

Newton is asked for a kiss … by a woman’s husband
In 2008, a female reporter in a wedding dress from Mexico’s TV Azteca famously asked Tom Brady to marry him, but he politely declined. And on Monday, a Newton got an equally interesting proposition.

“You want me to kiss your wife?” he said in shocked response to a question from the crowd. “I can’t do that. If I kiss her, I have to kiss a lot of other people.” 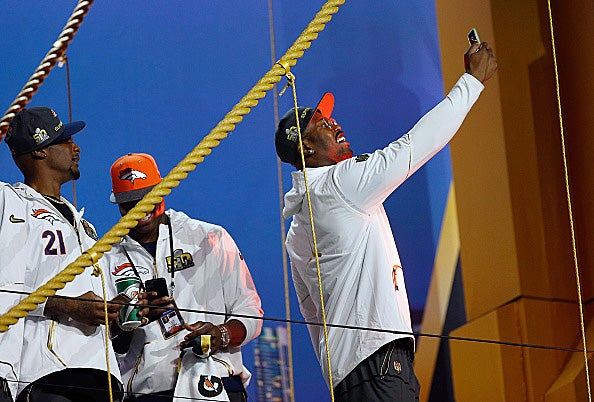 Players snap selfies galore
While the stadium was packed with photographers from around the world, the players were keen to capture the mayhem themselves. Panthers defensive end Charles Johnson came in carrying a selfie stick, while teammate Ten Ginn Jr. filmed the crowd with his iPhone as he walked out on stage. Broncos outside linebacker Von Miller was also spotted grinning wildly as he held his cell phone high above his head to snap a selfie.