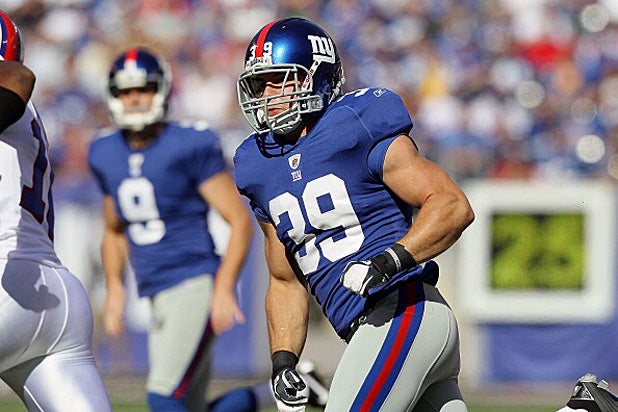 The Super Bowl champion was discovered dead from an accidental overdose of pain medications at his Iowa home on Sept. 8. His family donated his brain to be studied for chronic traumatic encephalopathy.

Last week, representatives from Boston University and the Concussion Legacy Foundation notified the Sash family that CTE had been diagnosed. The disease, which can be confirmed only posthumously, had advanced to a stage rarely seen in someone his age.

The CTE scale rates severity from 0 to 4, and Sash had progressed to Stage 2, which is about the same as former New England Patriots linebacker Junior Seau when he committed suicide at age 43 in May 2012.

After being drafted by the Giants in 2011, Sash was a member of the Super Bowl XLVI championship squad but was released by the team in August 2013 having suffered from multiple concussions.

The former Iowa sports star went on to display bouts of erratic behavior, confusion, memory loss and temper fits. He was also arrested for public intoxication after leading the police on a four-block chase with a motorized scooter, and was unable to hold down a job.

“My son knew something was wrong, but he couldn’t express it,” his mother Barnetta Sash said Monday, according to the Times. “He was such a good person, and it’s sad that he struggled so with this — not knowing where to go with it.

“Now it makes sense. The part of the brain that controls impulses, decision-making and reasoning was damaged badly,” she added.

While Sash was only in the NFL for two years, he spent much of his life on the football field and sustained at least two concussions in high school, one documented concussion in college and two with the Giants.

“Even though he was only 27, he played 16 years of football, and we’re finding over and over that it’s the duration of exposure to football that gives you a high risk for CTE,” Dr. Ann McKee, chief of neuropathology at the V.A. Boston Healthcare System and a professor of neurology and pathology at the Boston University School of Medicine who conducted the examination, said. “Certainly, 16 years is a high exposure.”

An autopsy revealed that the cause of Sash’s death was a lethal mixture of two powerful pain medications, methadone and hydrocodone. A medical examiner called the overdose “accidental drug toxicity,” adding that a recent shoulder dislocation and a history of chronic shoulder pain were “significant conditions” in the death.

The disturbing issue of concussions was highlighted in Will Smith‘s film “Concussion,” which tells the real-life story of Dr. Bennet Omalu’s discovery of the link between brain injury, chronic traumatic encephalopathy, and professional football players, and the NFL’s denial of the connection.

On Dec. 30, just days after the movie was released, New York Jets offensive lineman D’Brickashaw Ferguson wrote a first-person essay for Sports Illustrated saying he felt betrayed by the NFL after watching the film.

Last week, former Pittsburgh Steelers wide receiver Antwaan Randle El said he regrets ever playing in the NFL. “If I could go back, I wouldn’t [play football],” the 36-year-old, who is now battling longterm memory loss and physical limitations, told the Pittsburgh Post-Gazette.