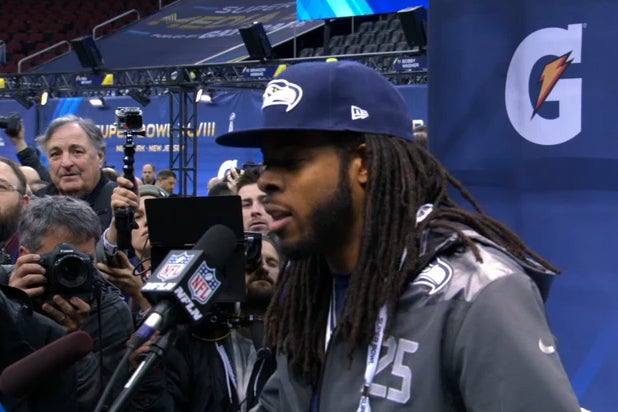 Forget Super Bowl Sunday, Media Day Tuesday often provides some of the most excitement at the end of a long National Football League season.

This year, a handful of storylines go beyond the on-field drama of the Seattle Seahawks No. 1 defense taking on the Denver Broncos No. 1 offense. Reporters clamored around three players specifically in Newark, N.J.: Denver quarterback Peyton Manning, one of the best to ever play his position, still very much in his prime but admittedly on the downslope of his career; Seattle cornerback Richard Sherman, who has made more headlines recently for his post-game interview antics than his excellent between-the-lines play; and his teammate, running back Marshawn Lynch, a beast of a player who has a well-known aversion to the media spotlight.

For his part, Manning shunned the obvious media question — and opportunity — to discuss what Sunday’s game means to his already impressive legacy. “I’ve been being asked about my legacy since I was about 25-years-old … I’m not sure you can have a legacy when you’re 25-years-old — or even 37,” Manning told journalists. “I thought you had to be like 70 to have a legacy. I’m not even sure what the word means.”

Sherman was courteous with the media when asked repeatedly about his now-infamous post-NFC Championship Game remarks to Fox Sports reporter Erin Andrews, but clearly is not comfortable with the attention being taken away from his team’s terrific on-field accomplishments.

Following the Seahawks victory over the San Francisco 49ers, Andrews asked Sherman to describe his final play heroics. “Well I’m the best corner in the game. When you try me with a sorry receiver like [49ers Michael] Crabtree, that’s the result you gonna get. Don’t you ever talk about me!”

To which Andrews asked Sherman, “Who was talking about you?”

“Crabtree,” Sherman replied. “Don’t you open your mouth about the best. Or I’ma shut it for you real quick. L.O.B.”

As for Lynch, the microphone-shy Seattle workhorse ditched his required media session after approximately six minutes, according to multiple reports, electing instead to go to a secluded area.

That’s where former player Deion Sanders tracked the hoodied, sunglassed Lynch down for an NFL Network interview, where the man of few words casually cursed on live TV. “You look good,” Sanders said. “Shit, you do too,” Lynch replied.

When asked if his lack of participation at the Prudential Center media gathering stems from shyness, Lynch denied it. “I’m about that action, boss. I ain’t never seen no talking win me nothing.”

Though when Sanders asked Lynch if he’s excited for the game, the strong tailback replied, “Hell yeah.”