It started out with so much promise. Oprah playing mom/referee between Letterman and Leno on a cozy couch, scolding the two for teasing each other like competitive siblings.

It would have been funny, too, if only Conan was somehow involved. Even subliminally.

Maybe a ginger-colored “ghost” jumping up and down behind the couch (or on Leno’s lap). Or a subtle “I’m still with Coco” sign scrawled somewhere in the corner. Or a telltale lit cigar in an ashtray.

Something, anything, to acknowledge the lanky one who lost the playground battle.

But nothing. CBS played it safe, perhaps not wanting to ruffle the Peacock’s feathers or Zucker’s ego.

So, there were the three mega-hosts playing along with the program, Letterman mocking Leno, Oprah diffusing the tension, and nobody got hurt. Except the viewers who are still reeling from the late-night wars of just a few weeks past.

I kept waiting for the payoff. The big laugh. But all I was left with was an uncomfortable knot in my stomach (next to the nacho-cramp) that hasn’t yet gone away.

That was only one of many failed commercials. With the wonderful exception of heavyweight veterans Betty White and Abe (he’s still not dead) Vigoda, there were no other highlights among the dismal, misogynistic Super Bowl ads.

The Puppy Bowl on Animal Planet was far more entertaining than those abysmally expensive ads. 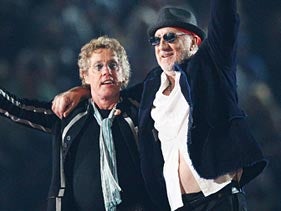 And the Who? The only excitement was the wardrobe malfunction during that creaky embarrassment, when Townshend’s bottom shirt button popped, exposing his mid-girth. Big deal. I see that every day, just walking around.

Their performance was a shadow of their once-greatness (I know how old they are, calm down), and Daltrey’s inspired scarf attire didn’t help his once-macho manliness.

I cringed each time Townshend performed his signature windmill, thinking he was about to pop a rotator cuff or something.

I prefer my old rockers the way they used to be: anti-establishment, raucous and relevant. Hard to maintain that pose when commercials using their greatest songs mock the very things they used to deride.

Thankfully the thrilling game eased the cringe-worthy sight of three deflated talk-show hosts mock-fighting. If only Conan had been there to settle the score.