1978’s “Superman: The Movie” was the first blockbuster to prove a superhero film could be a drama with human stakes — and Patty Jenkins’ “Wonder Woman” is filled with loving allusions to the 1978 Christopher Reeve super-classic.

Insiders tell TheWrap that Jenkins and DC Films President and Chief Content Officer Geoff Johns love the Richard Donner film and bonded over it. It shows.

The homages begin when Wonder Woman, aka Diana Prince (Gal Gadot) arrives in London and goes shopping with Chris Pine’s Steve Trevor and Lucy Davis’ Etta Candy for clothes more modest than her warrior gear. When Steve gives Diana glasses as a disguise, Etta notes that they can’t distract from her beauty. (Just as Clark Kent’s glasses could never convincingly hide the Man of Steel’s handsome features.)

Gadot dresses in a dark coat and hat with some similarities to the ones Reeve wears as Clark in “Superman.” And then leaves the department store through a revolving door.

In both “Superman” and “Wonder Woman,” the revolving door scene leads into an attack in an alleyway. In “Superman,” Clark catches a bullet to protect Lois Lane (Margot Kidder) from a mugger. In “Wonder Woman,” Diana deflects bullets with her bracelets to protect Steve. She’s still wearing a very Clark-like outfit, including the glasses, and both scenes take place against the backdrop of a brick wall.

Johns tweeted a picture over the weekend that explains why the image is so rich with meaning: 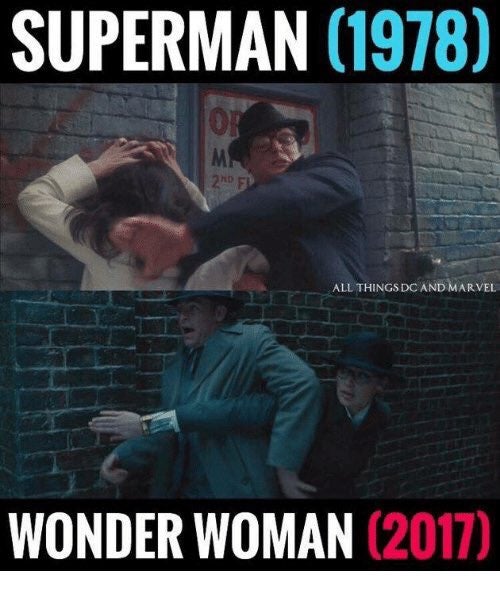 “This had us madly giggling. @PattyJenks #Donner,” he wrote.

But it’s also symbolic: Now it’s a woman protecting a man from bullet, instead of the other way around.

Of course, Steve isn’t exactly helpless in “Wonder Woman” — and Lois knew how to fight in “Superman”: As you can see in the “Superman” clip above, the mugger only opens fire after Lois delivers a perfectly timed kick to his face.

Warner Bros.’ “Wonder Woman” now officially has the third $100 million-plus opening of 2017, finishing the weekend with a domestic total of $103.1 million.

Wonder Woman will also play a major role later this year in “Justice League,” where she will team up with Batman, Cyborg, The Flash, and Aquaman.

We can’t wait to see what witty homages they have planned.

With early buzz creating what is looking to be a surefire hit, we take a look at possible sequel storylines from the comics

With "Wonder Woman" opening in theaters on June 2nd, the following comics are some of the most critically acclaimed storylines which could fuel a sequel.