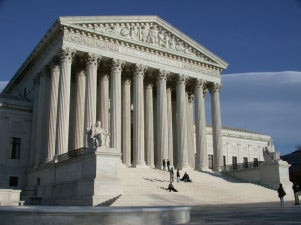 The Supreme Court struck down a 1999 federal law making it a crime to sell videos depicting scenes of animal cruelty on Tuesday.

In a 8-1 decision, the court found that a law meant to limit the dissemination of "crush videos," which  appeal to certain sexual fetishes by showing the killing and torture of animals, was too sweeping and violated free speech rights.

"The First Amendment itself reflects a judgment by the American people that the benefits of its restrictions on government outweigh the costs. Our Constitution forecloses any attempt to revise that judgment simply on the basis that some speech is not worth it, " Chief Justice John Roberts wrote for the majority.

The law in question was used to prosecute a Virginia man, Robert Stevens, who ran a website called "Dogs of Velvet and Steel," that sold videos of dog fights.

Roberts went on to note that the statute’s language was too far-reaching, extending beyond simply the sale of "crush films" "…to create a criminal prohibition of alarming breadth. To begin with, the text of the statute’s ban on a ‘depiction of animal cruelty’ nowhere requires that the depicted conduct be cruel."

In particular, Roberts noted that the language of the law did not simply outlaw movies depicting dog fighting and other forms of animal abuse, but was broad enough to include videos and magazines that showed scenes of hunting.

In his dissent, Alito argued that striking down the law would have the unintended consequence of revitalizing the "crush film" industry.

"The Court strikes down in its entirety a valuable statute, 18 U. S. C. §48, that was enacted not to suppress speech, but to prevent horrific acts of animal cruelty—in particular, the creation and commercial exploitation of ‘crush videos,’ a form of depraved entertainment that has no social value," Alito wrote.

Animal rights groups and the Obama administration had joined together to support the constitutionality of the law, arguing that it should be subject to the same restrictions as child pornography.

U.S. Rep. Elton Gallegly, Calif., who sponsored the legislation that was overturned by the court, said he was “disappointed” and promised to immediately introduce new legislation that complies with the court’s suggestion for a more tailored response.

“While I respect the Court’s decision, I do not believe justice is served when human beings are allowed to violently abuse animals,” Gallegly said in a statement.

“Violence is not a First Amendment issue; it is a law enforcement issue. From the beginning I have cited studies that show that the Jeffrey Dahmers of the world – the Albert ‘Boston Strangler’ DeSalvos, Ted Bundys, David ‘Son of Sam’ Berkowitzes and Ted ‘Unabomber’ Kaczynskis – began their killing sprees by cruelly inflicting pain on animals.”

He said the new legislation “will stop the sale of videos that show the mutilation and torture of animals.

"The Supreme Court’s decision gives us a clear pathway to enact a narrower ban on the sale of videos depicting malicious acts of cruelty, including animal crush videos and dogfighting," said Wayne Pacelle, president and CEO of The Humane Society of the United States, said in a statement. "Congress should act swiftly to make sure the First Amendment is not used as a shield for those committing barbaric acts of cruelty, and then peddling their videos on the Internet."

But free speech advocates hailed the decision as a victory for the First Amendment.

“As the Court today recognized, giving the government ‘freewheeling authority’ to judge the social worth of words and images is a dangerous proposition,” said David Horowitz, executive director of Media Coalition, said in a statement. “This landmark ruling affirms that First Amendment protections are not subject to balancing tests or limited to speech with so-called serious value.”