Eight hours into jury deliberations, the judge declared a mistrial in the John Travolta extortion trial on Wednesday. 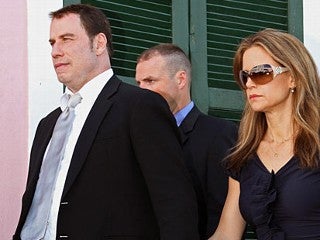 The judge said she had been informed that an announcement was made at a local political rally that one of the defendants had been found not guilty in the monthlong trial.

Paramedic Tarino Lightbourn and his attorney, former Bahamian Sen. Pleasant Bridgewater, have been accused of trying to extort money from Travolta, whose son Jett suffered a seizure at the family’s Bahamian vacation home on Jan. 2.

The couple allegedly wanted Travolta to pay them $25 million to keep secret a medical document showing that the actor had declined to have his son taken to a nearby hospital.

"About two hours ago, there was an announcement at a particular political party," she said. "It leaves the impression that there may have been a communication in the jury room. I am going to discharge you from returning your verdict."

Allen then ordered a retrial.

“This came out of the blue; this was so weird,” Mike Ossi, one of Travolta’s Florida lawyers, told People Magazine.