Survivor once again welcomes you to Blindside City.

It’s Night 18 and Foa Foa is in a horribly inferior position with four people out of 12. Russell has some big idears about getting members of Galu to move over, and he’s “too good for this game and too sly.” And, he’s ready to plant his seed in the other dumbasses heads.

Day 19 and things aren’t all wine and roses for Galu despite their dominance of the game thus far. Shambo and Laura are having a power struggle and Shambo once again reverts to her 90210 comparison for the rest of her tribe. Erik, who is back in his tree, thinks Laura is crazy to even bother fighting with Mrs. Walsh, I mean, Shambo.

The tribes walk towards each other and a treasure chest is sitting on the beach. Inside the chest is a parchment that tells them that the merge is happening and that a feast awaits. The 12 dig in and Shambo is on a sugar high. The tribes are getting to know each other and feeling each other out (not literally, of course). Laura feeds Russell grapes and he thinks it makes him sovereign-like.

Natalie feels like life at Galu is like the Hilton. The actor who plays Conrad Hilton on "Mad Men" wanders onto the set and says that he doesn’t approve of this comparison. Russell, for some reason, shows Laura his idol (no, not that one, get your mind out of the gutter) and he tells her he would give it to her (man, there I go with those double entendres again) if she needs it.

As Laura is digging up a plant in the sod, Russell tells the camera that she’s digging her own grave. Now Russell tries the same tactic with Monica, showing her his idol and giving her the same load of BS he fed to Laura. Now is he showing it to John? Yes he is. Russell tries to convince John that Laura should be voted off first to get rid of the “girl power.” John seems to be buying it, so things are going to get crazy. Russell compares himself to Babe Ruth before we go to a commercial.

Russell is now trying to work his magic on Shambo, as they share their collective hatred of Laura. Shambo tells the camera that she trusts Russell imlplicitly, and that they’re cut from the same cloth. Not sure what cloth that would be, but we’ll give her the benefit of the doubt … .

It’s time for an individual immunity challenge. Survivor T-Ball is the game, and today two people will receive immunity: one woman and one man. Did Dave just say “making love is my sport”? Yup. Ladies, everyone together now: Ewwww. The guys each take a turn at bat and John, the last man to hit, wins immunity. Now it’s the women’s turn. And, to the dismay of most of the tribe, Laura also wins immunity. So if Laura is safe, who is going home from Aiga (the name of the new tribe)?

Russell is now refocusing on Monica, but Shambo doesn’t want to get rid of her. Russell is slightly worried and says he may play the idol. Laura tells Erik that Russell has the idol and they strategize about flushing it out. John says that some of his tribe mates are playing junior varsity "Survivor" by hoping to pick off Foa Foa members first.

Dave isn’t sure what’s going on in Erik’s head, and there seems to be confusion all around. Erik is trying to convince the other three Foa Foa members who aren’t named Russell to vote Monica but tell Russell that he’s going home so that the idol will be played.  Jayson has his own ideas and wants to put the votes on Erik. Are you as confused as I am? Yeah, I know. I don’t think I’ve ever heard so much strategizing going on so early in the game. The girls are all apparently on board with voting Erik out. Russell is not sure whom to believe and admits that for the first time he isn’t all too confident. Time for tribal.

The subject of trust comes up and nobody is sure whom to trust. Erik trash talks the old Foa Foa by saying that they’re all essentially useless and don’t offer anything to this newly formed tribe. Russell doesn’t like his pity and says that Erik will be surprised. Erik thinks he’s got everyone pegged, and may be as arrogant or even more so than Russell. Erik’s personal attacks on Jayson aren’t sitting too well with Jayson. And it’s time to vote… Russell is voting for Erik – and that’s the only vote we actually get t 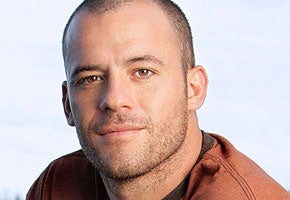 o see.
This is going to be interesting.
First two votes are for Jayson, but the next seven (eight, as it were) are for Erik, who looks very surprised, while Russell does his best Cheshire cat impression.
Next week, they make it appear that everyone gangs up on Russell who is out of idols and out of friends. Why do I get the feeling he’ll find a way to see another three days?
BIO Mark Stone

Mark Stone is a freelance entertainment writer living in Kelowna, BC, Canada. He is the managing editor of DailyBrainCandy.com and author of "Behind the Screen: Hacking Hollywood."

Mark Stone is a freelance entertainment writer living in Kelowna, BC, Canada. He is the managing editor of DailyBrainCandy.com and author of "Behind the Screen: Hacking Hollywood."