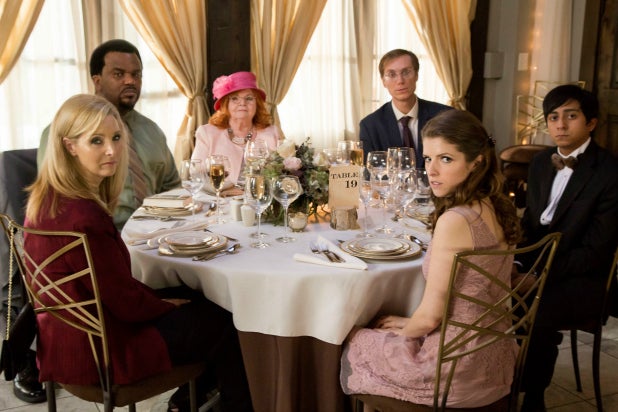 Being a guest at a wedding is more than just an opportunity to celebrate a hopefully happy couple; it’s a chance to find your place in the bride’s or groom’s pecking order of intimacy and importance. The invitees relegated to the “who are they” corner of the party are the subject of “Table 19,” a low-key romantic comedy.

For a good while, the film threatens to be as forced as an unwanted attendee, and as forgotten as the types of guests it focuses on, until it rallies toward the end with an easy sweetness and comedic warmth it had been lacking for too long. In a way, that makes it not terribly unlike the trajectory of many weddings, save the most common reason those rites become enjoyable: alcohol. (That’s not a suggestion, incidentally, for how to see this.)

Writer-director Jeffrey Blitz has shown a fondness for misfits before, in both his Oscar-nominated spelling bee documentary “Spellbound” and his fiction feature debut, the 2007 debaters-in-love indie “Rocket Science.” The latter brought to moviegoers’ attention a flinty, funny newcomer in Anna Kendrick.

Ten years later Kendrick is front and center of Blitz’s “Table 19” as Eloise, a young woman whose churning indecisiveness about attending her oldest friend’s wedding is such that she checks off, crosses out, and re-checks the “accept” and “decline” boxes enough times that she ultimately decides to light a match to it. Before blowing it out, that is, and sending it off anyway.

This is followed by brief peeks into the lives of who we assume will be the guests at the titular table (labeled in a close-up of the seating chart as — ouch — “Randoms.”) Jerry (Craig Robinson) and Bina Kepp (Lisa Kudrow), are divorce-adjacent, squabbling diner owners who know the groom’s father through business. Friendly senior Jo (June Squibb) is a retired nanny absolutely sure the bride remembers her. Distant cousin Walter (Stephen Merchant) is on leave from a prison stint and nervous about that news getting out to total strangers. And friend-of-the-family teenager Renzo (Tony Revolori, “The Grand Budapest Hotel”) is by himself, sexually inexperienced, and hoping to change that.

So why is bright, attractive Eloise with the charity invites, all of whom the script saddles with unfunny getting-to-know-you chatter in their initial scenes together? Blame a bad breakup two months prior with best man Teddy (Wyatt Russell, “Everybody Wants Some!!”), the bride’s brother, who dumped Eloise by text, necessitating her demotion from maid of honor to a seat in Siberia. (Making matters worse: the new maid of honor, played by Amanda Crew of “Silicon Valley,” is also Teddy’s rebound romance.)

Driven by hurt, jealousy and, it’s later revealed, a truly pressing personal issue, Eloise is the kind of tough-but-vulnerable bundle Kendrick and her expressively downturned mouth were born to play, even if the script initially doesn’t do justice to her comically tense situation beyond having her flirt with a handsome crasher (Thomas Cocquerel), bicker with Teddy, and create a cake mishap. (At the least, it’s a step up for Kendrick in marriage wingding movies from last year’s execrable “Mike and Dave Need Wedding Dates.”)

Though Blitz is smart economically to skip the ceremony and get straight to the ballroom location, the first third of the movie is strained and weak. It’s hard to ramp up concern for Eloise emotionally when the details of her relationship to the wedding party are doled out in bits and pieces, and time is awkwardly spent elaborating on the humorless eccentricities of her tablemates.

When “Table 19” tries to be a goofy humiliation comedy, it’s barely engaging. (The pratfalls are numerous and laugh-free.) But when it settles down into something like an indie ensemble about disappointment and the comfort of strangers, Blitz finds a more effortless tone, and even manages a few well-played surprises that bring genuine heart to the uptick in Eloise’s fortunes.

Part of this has to do with the tricky role Russell has, and ultimately sells. But a lot of it is on Kendrick’s shoulders, and she comes through with her special brand of brittle delivery and appealing sensitivity. One imagines the many less-skilled actors who wouldn’t be able to pull off locating the touching and droll movie inside the initially ill-at-ease and ordinary one. “Table 19” is fortunate Kendrick not only showed up for the party but also came to play.