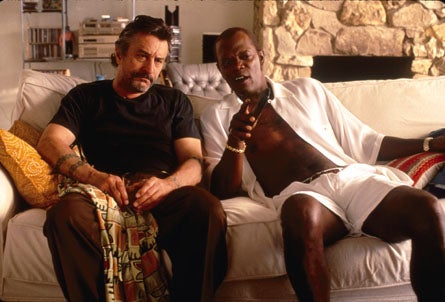 Papa’s got a brand new bag … and a brand new cast. There’s only one question … who’s playing who?

Now, two lucky actors will be asked to play younger versions of the characters Ordell Robbie (Jackson) and Louis Gara (De Niro), as screenwriter Dan Schechter ("Goodbye Baby") has written an adaptation of Leonard’s 1978 novel "The Switch," according to JoBlo.

Schechter will produce the film with Michael Siegel ("Be Cool" — another Leonard adaptation), while Leonard will exec produce "The Switch," which is not to be confused with the upcoming Jason Bateman-Jennifer Aniston pregnancy comedy.

Perhaps most importantly, Tarantino himself has reportedly given the project his blessing, although he will not be involved in any official capacity. In a recent interview with Telegraph UK, Tarantino cited Leonard as "probably the biggest influence on my life," before relaying a tale about stealing "The Switch" from a K-Mart when he was 14 years-old, and getting grounded all summer long as a result. Typical Quentin!

With the script finished and approved by Leonard, producers will begin casting and searching for a director, as well as a studio willing to properly distribute the picture.

In "Jackie Brown," the title character (Pam Grier) gets caught by the ATF with Ordell’s dirty money and decides to set him up rather than go to jail, while her employer enlists the help of his former prison pal Louis to help him kill Jackie.

"The Switch" finds Ordell and ‘Lou-iss’ hitting it off in prison, where both are doing time for grand theft auto. Upon their release, they join forces for one big score that finds them kidnapping the wife of a wealthy Detroit developer. When the husband refuses to pay the ransom for his wife’s return, Ordell and Louis are forced to reconceive their plan, and the angry housewife uses the ex-cons to get her revenge.

As AICN notes, this is more or less the plot of O. Henry’s short story "The Ransom of Red Chief," which was required reading for this writer back in middle school. "Red Chief" also inspired the dark comedy "Ruthless People."

Based on Don Cheadle’s portrayal of Maurice "Snoopy" Miller in Steven Soderbergh’s Leonard adaptation "Out of Sight," I’d say the "Iron Man 2" star has the stuff to play a young Ordell, although Anthony Mackie ("The Hurt Locker") could also puff out his chest and pull it off, plus he has experience inhabiting the criminal mind having played a drug dealer in "Half Nelson" and Spike Lee’s "Sucker Free City." As for a young De Niro, good luck with that one, Hollywood.