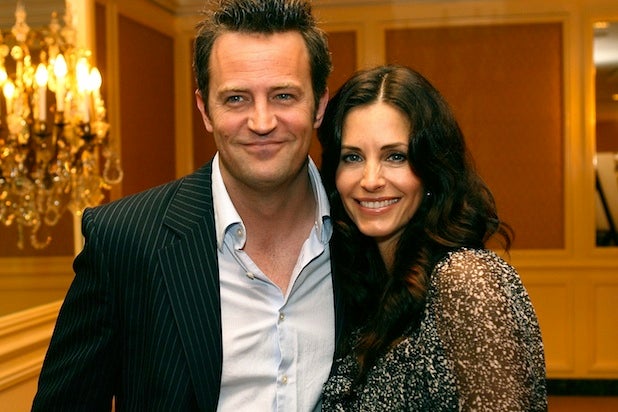 Matthew Perry and Courteney Cox are staging a mini “Friends” reunion on TBS’s “Cougar Town,” when it returns for its fifth season on Tuesday, Jan. 7, at 10/9c.

The network isn’t revealing the details of Perry’s guest role at this time.

There’s some reciprocity in Perry’s appearance as Cox guest-starred on his short-lived NBC comedy, “Go On,” on an episode that aired in March.

This will be the third time Cox has enlisted a “Friends” co-star for the series. Lisa Kudrow guest-starred during its first season in 2010 as Jules’ (Cox) cruel dermatologist, Dr. Amy Evans, who she finds it out is seeing her ex-husband, Bobby (Brian Van Holt). And Jennifer Aniston appeared on Season 2 as Glenn, Jules’ new psychiatrist.

Perry and Cox starred together on NBC’s “Friends” from 1994-2004. Aside from “Go On,” Perry also guest-starred on a multi-episode arc on CBS’s “The Good Wife.” He also starred in, executive-produced and co-wrote the short-lived series “Mr. Sunshine” for ABC. His TV credits also include Aaron Sorkin’s “Studio 60 on the Sunset Strip” and “The West Wing,” which earned him two Emmy nominations. Perry also received Emmy, Golden Globe and Screen Actors Guild Award nominations for TNT’s original movie, “The Ron Clark Story.”

Formerly on ABC, “Cougar Town” moved to TBS in January 2013 for its fourth season. It averaged 2.6 million viewers and 1.7 million viewers in the advertiser-coveted adults 18-49 demographic, including time-delayed viewing.

Note: A previous version of this article mistakenly stated this was the second time a “Friends” castmember has appeared on the series.