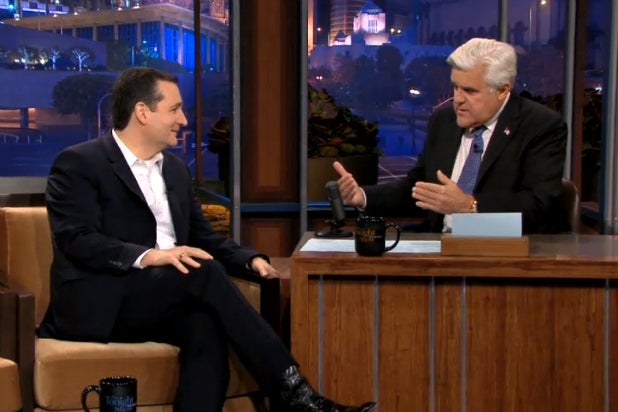 A tieless Sen. Ted Cruz joined Jay Leno for a “Tonight Show” segment Friday that was light on laughs but heavy in political debate.

“I’ve been reading a lot about you lately, and they describe you as aggressive, arrogant and abrasive,” Leno opened with. “Accurate?”

Cruz responded, “Well, I don’t know that you can believe everything you read.”

See video: ABC News Asks Ted Cruz: ‘How Much Do Your Colleagues Just Despise You?’

“Any one of those?” Leno countered.

“You know, what I’m trying to do is do my job,” Cruz said. “And occasionally people don’t like that.”

Naturally, the conversation turned to where Cruz has been making his mark — his staunch opposition to Obamacare. Cruz said that the plan is bad for his home state of Texas, because the Affordable Care Act kills jobs and will actually take away health insurance from some of those who already have it.

Before long, the topic at hand was the other hot button issue that Cruz has been outspoken on: gay marriage. Leno said, “To me, Republic should be about defense and money; everything else is do whatever the hell you want, pretty much. Why all the focus — for example, gay marriage; you’re against it?

Cruz was also asked about his father, a pastor who recently made headlines for his own opposition to same-sex marriage. The senator called his dad “a man of deep integrity,” saying his critics should attack him, not his father.