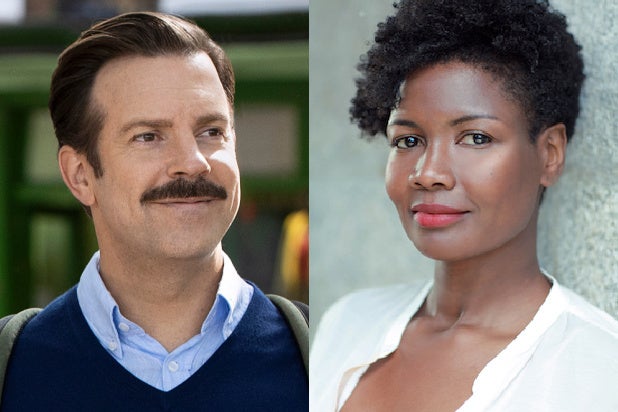 “Ted Lasso” has added a new team member for Season 2. The Jason Sudeikis-starring Apple TV+ comedy cast Sarah Niles (“I May Destroy You”) as Sharon, a sports psychologist who has been brought in to work with AFC Richmond.

Good luck with that bunch, Sharon.

“Ted Lasso,” which on Sunday earned Sudeikis a Golden Globe Award for Best Actor in a Comedy Series, is currently in production on Season 2.

In the show, Sudeikis’ Lasso was a small-time college football coach from Kansas who was hired to coach a professional soccer team in England, despite having no experience coaching soccer. The premise is pretty much the same as those old NBC Sports digital shorts; much like the viral videos, hilarity ensues on “Ted Lasso” — and so does heart.

In addition to starring, Sudeikis serves as executive producer, alongside Bill Lawrence via his Doozer Productions, in association with Warner Bros. Television and Universal Television, which is a division of Universal Studio Group. Doozer’s Jeff Ingold also serves as an executive producer with Liza Katzer as co-executive producer. The series was developed by Sudeikis, Lawrence, Joe Kelly and Brendan Hunt, and is based on the pre-existing format and characters from NBC Sports.

Also Read: Jason Sudeikis on Why the Niceness of 'Ted Lasso' Will Endure Beyond the Trump Era

The newest “Ted Lasso” series regular recently wrapped the limited series “Viewpoint” for creators Harry Bradbeer and Ed Whitmore. Niles is no stranger to Apple TV+ audiences, having previously performed on the platform in “Trying.” She’s also had a successful stage career, appearing at the National Theatre, Royal Court, The Old Vic and The Bush Theatre.