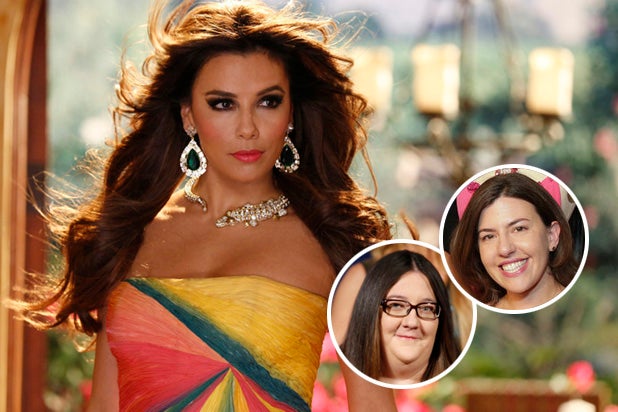 The idea was initially pitched to writers Chrissy Pietrosh and Jessica Goldstein, with Longoria attached as an executive producer, but by the time it came to casting the show, the actress’ on-screen role was inevitable.

The actress was just about the only one who didn’t know from the beginning that she would star. Goldstein and Pietrosh jumped at the chance to make the show — about the behind-the-scenes drama on a telenovela set — with her in mind from the beginning as the female lead.

“She would read in casting. She was like, ‘I’ll just read Ana,’ and it would come to life,” Goldstein said in an interview with TheWrap. “Watching that happen was like, ‘That’s the show.'”

TheWrap: What initially appealed to you about “Telenovela” when it was pitched to you?
Goldstein: It’s so funny because it was just a gut thing.
Pietrosh: Because we’re writing partners, we’re never allowed to agree to anything without talking about it. One of us can’t be like, “Oh yeah, we’re doing that.” So we heard the idea and kind of had to play it cool like–.
Goldstein: “That’s very exciting. We’ll talk about it.”
Pietrosh: And then the second the elevator doors closed on the way down, we were like, “So we’re doing that, right?” It was just like idea after idea. And the whole first season just came out.
Goldstein: For me, it was the name that sold it.
Pietrosh: All this was before realizing how good Eva was. We just knew that she was funny on “Desperate Housewives,” she was pretty, and she seemed nice. It’s such a cool platform to get to tell a lot of great stories. And our motto for this year is “Big moments, small stories,” and we got to tell all the stories we wanted to tell.
Goldstein: And have all those big moments too.
Pietrosh: It really just felt like there was no doubt in our mind it was going to be great.

Did you have in mind that Eva would star in addition to being an executive producer?
Pietrosh: We wrote it hoping she was going to star, but it wasn’t until the last minute — we had already cast Jencarlos [Canela] as Xavier — before we knew that she was going to. She was talking about other things she was doing.
Goldstein: She’s a very busy woman. We were hoping it would be her … we couldn’t even imagine another person. She would read in casting. She was like, “I’ll just read Ana,” and it would come to life … Watching that happen was like, “That’s the show.”
Pietrosh: It wasn’t a guarantee, but thank god it happened.

Was it important to you that your show be a platform for showcasing minority actors?
Pietrosh: We wanted to make a really good comedy, and we found really talented people.
Goldstein: In a world that was very exciting for us.
Pietrosh: Is it a great thing that this cast of Latino actors, who typically wouldn’t even be seen for a role, got to be in front of the camera? It’s a fantastic thing.
Goldstein: It wasn’t our goal, but there have been moments all along the way. Like when we were casting, we had people come in and say, “I haven’t ever read for a role that wasn’t a gang member.” And Izzy [Diaz] was like, “I’ve never just played a person.” We realized it was happening as it was happening, but it wasn’t our primary goal. We’re incredibly proud to be a part of that.