The start of the fall television season has prompted a massive upsurge in online piracy.

Premieres of new shows and returning series has brought viewers back to their sets, but the interest surrounding these debuts have also attracted a huge worldwide audience to pirated material, according to a new study by DtecNet, a provider of piracy-detection services.

The report found that piracy of U.S.-produced content was at four times the level it was at the previous year. 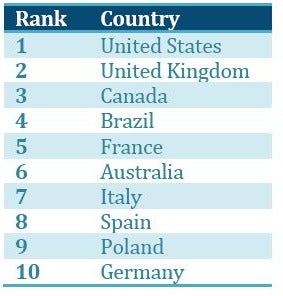 "Even with all the new content out there, that increase is still disproportionate," Pam Allison, head of DtecNet’s business intelligence division, told TheWrap. "This is no a-ha moment, but we found that pirating tends to be aligned with the introduction of new shows."

The study also examined where geographically much of the pirating was taking place (see chart). It found that the United States still tops the charts for pirating, with 12 percent of all television pirating taking place domestically.

But Europe, a region with widespread access to broadband and a high percentage of English speakers evinced a thirst for American television programs.

This increase in pirating comes at a time when many European countries such as Sweden, France and the United Kingdom are considering or implementing stricter penalties for copyright violations. In something of a surprise, Brazil, a country with more limited access to high-speed Internet, was responsible for 5 percent of the fall’s total downloads.

In other bad news for programmers looking to maintain a tight grip on distribution, typically within hours of a program being aired, file traders around the world were exchanging new episodes, according to the study.

"There’s very little delay between when something enters the market, and when people start pirating," Allison said. "People don’t want to wait for it to be offered legitimately."