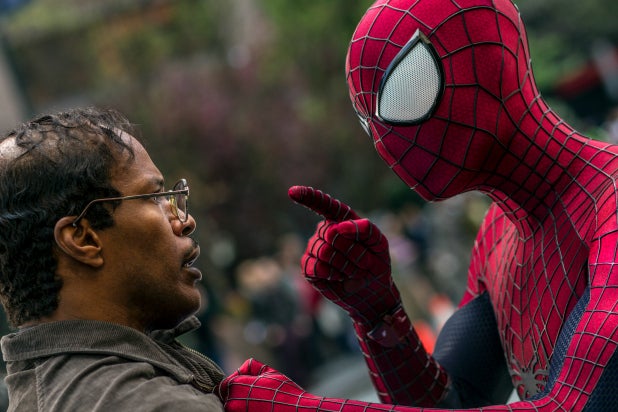 Spider-Man is back, bigger and slightly better — but only slightly, and with too much emphasis on “bigger.”

There are a few well-tuned moments in Mark Webb’s “The Amazing Spider-Man 2,” from the charming, charismatic interaction of stars Andrew Garfield and Emma Stone to the occasional flash of excitement in its wide-screen action. To get to those, however, you have to wade through a two-and-a-half-hour running time that encompasses three costume-clad villains, two shadowy string-pullers, four distinct climaxes and still finds room for every single cliché of big-budget franchise screenwriting.

The genesis of this latest iteration of the Marvel Comics character on the big screen came in no small part thanks to prior series director Sam Raimi wanting more money, as well as Sony’s reluctance to lose their rights to the character back to Marvel by not moving forward with the property. This latest series effort continues down the road of choosing long-term corporate strategy over present-moment storytelling, more intent on setting up Sony’s already-announced spin-offs than it is in telling a clean, clear story.

The script, credited to Alex Kurtzman, Roberto Orci and Jeff Pinker, is much like every other previous Kurtzman-Orci script, from “Transformers” and “Star Trek” to  “Transfomers 2” and “Star Trek Into Darkness”: Jammed so full of bits of business to please the boardroom that there’s almost nothing left for the audience; as screenwriters, Kurtzman and Orci always confuse activity for action and stuff  for storytelling.

Tedious fidelity to the source material — almost always a fatal flaw for these comic-book films — also means that the film’s biggest “game-changing” plot element is something that happened in the Marvel Comics back in 1973: I’m not saying new viewers will see it coming, but since it’s technically been coming since when Nixon was in power, they’re hardly to blame.

Also read: ‘Amazing Spider-Man 2’ Will Get Massive Rollout From Sony

Jamie Foxx plays the big bad guy: Nebbishy, needy Max Dillon, an electrical-engineering employee of series mega-company Oscorp, who falls into a tank of genetically-modified electric eels and emerges as the voltage-shooting villain Electro, incandescent blue and easily led. Dane de Haan, who can manage to be simultaneously menacing and pathetic, endearing and threatening, is Harry Osborne, old friend to Garfield’s Peter Parker and young heir to the Oscorp empire, who winds up twisted by science and hubris into the Green Goblin.

Foxx’s performance, swaddled in special effects as it is, is fine; it’s too bad that his character’s arc and manner is lifted wholesale from that of Jim Carrey‘s Riddler in Joel Schumacher’s “Batman Forever,” and that Electro’s best visual FX trick is also lifted entirely from Dave Gibbons and Alan Moore’s work in the seminal 1986 comic “Watchmen.”

The cinematography, by mega-pic DP Dan Mindel (“John Carter,” “Star Trek,” the upcoming “Star Wars: Episode VII”), is not quite as clean and crisp and clear as you might hope; it’s a little too quick, a little too caffeinated. The score, by Hans Zimmer and a cast of luminaries including Pharrell, Johnny Marr and Junkie XL, is more of the same as well: Bass-heavy booming that often drowns out the dialogue, straight off the rack.

Garfield and Stone are, just as in the first film, a highlight; it makes you wish the two would find almost any other project to be in, so that their funny, warm interactions wouldn’t have to be perpetually interrupted by Kurtzman and Orci’s by-now worn-out versions of world-threatening peril. Garfield is especially great as Parker and Spider-Man, even if he is a little too old to be a convincing high-school senior. Garfield also works superbly when the script, wisely, slows down to show the Spider-Man character’s traditional moments of saving civilians from mayhem and interacting with the blue-collar Big Apple, from bodega clerks to NYFD firemen, as a fellow New Yorker trying to get by.

The highlights can’t make up for the low points, however, from cliché countdowns for the action out of Bad Screenwriting 101 to the kind of sequel-setting throat-clearing designed to make comic-book movie fans quit contemplating the film they’re watching and start anticipating what’s to come. (Between the runaway rumor-industrial complex of most film sites to the obligatory post-credits scene, superhero films now do Pavlov one better, teaching fans to salivate, slack-jawed, for bells that are years from actually being rung.)

“The Amazing Spider-Man 2,” is just good enough to make you painfully aware of all the ways it’s not good at all. It’s a fine way to make money. It may not be the best way to make movies.