A photo from the set of “The Batman” revealing a full look at Robert Pattinson’s Batsuit surfaced Friday, along with what could be be the caped crusader’s batcycle. Following Warner Bros.’ official reveal of the suit last week, the new photo also show what appear to be spikes on the forearms of the iconic crime fighter’s costume.

Filming is currently underway in the United Kingdom which will explore Bruce Wayne’s second year as the Dark Knight. 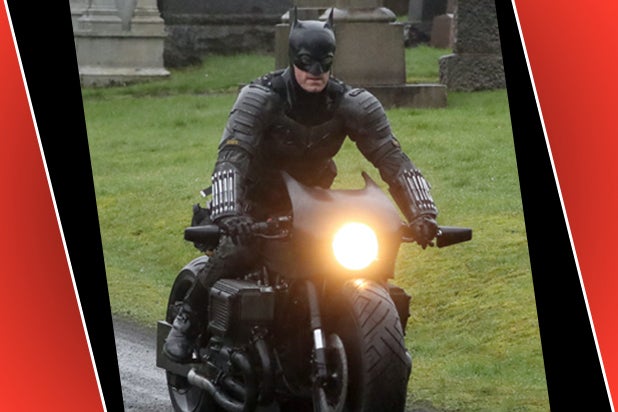 The cast includes Zoe Kravitz as Selina Kyle, (Catwoman), Paul Dano as Edward Nashton, (The Riddler) and John Turturro as Carmine Falcone. TheWrap previously reported that Andy Serkis is in talks to play Alfred Pennyworth and that Colin Farrell is in talks to star as The Penguin. Jeffrey Wright is playing Commissioner Gordon, Peter Saarsgard is playing the role of Gotham D.A. Gil Colson, while Jayme Lawson is set to star as well.