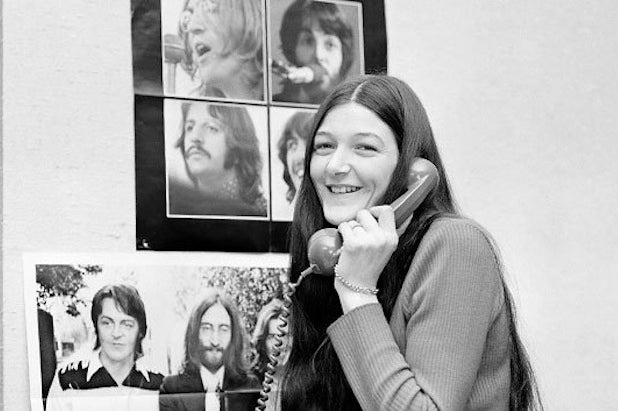 I was invited to a screening of “Good Ol’ Freda.” My friend Michael Des Barres, himself no stranger to the vagaries of the rock lifestyle, was hosting a screening of what is without a doubt the best documentary ever on the Beatles.

As someone who has seen, or thought he has seen everything on the Fab Four and made four pilgrimages to the holy land called Liverpool, I found myself sitting in a puddle of tears as I witnessed a totally different take through the eyes of a young Irish girl who was their secretary.

You will never see another documentary like this. Those who were there and speak on the record will not be with us for much longer. “Good Ol’ Freda” — directed by Ryan White and written by Jessica Lawson and Ryan White and available beginning Friday on ITunes, on-demand and in select theaters — is your last chance to step into that world.

Before the term “executive assistant” and “personal assistant” — there was “the secretary.” This was a time that pre-dated political correctness, and secretaries assumed the roles of mother, sister, confessor, minder, waitress, archivist. They often made executive decisions while earning entry wages. The secretary was the gatekeeper. You had to pass through her to get to your goal.

Freda Kelly lived a life that was challenged: motherless, living under the thumb of an authoritarian father in post-war Liverpool. She worked in a typing pool that guaranteed not only anonymity but a life of drudgery that was syncopated to the staccato beat of keys hitting carbon paper. Her only respites were lunches at the fabled Cavern Club, which she described as smelling of “backed-up toilets, cheese and rotten fruit.”

But the odor and sweat that literally dripped from the walls was forgotten once the music began. Freda was placed during a time of social upheaval, and she was positioned to not only witness it from a ringside seat, she was thrust into the maelstrom.

“Good Ol’ Freda” can’t be ruined by spoilers. We all know the story. We all know how it ended. However, it’s the telling of the story that is so different that makes this movie a standout.

Freda Kelly didn’t jump on the bandwagon and cash in on the intimacy that she had with John, Paul, George, Ringo and Brian — indeed, Epstein is a major character in this, and to the film’s credit, he is finally given his due. Freda waited until she was invited to tell her story. She waited through her own life — a life that included a divorce and the death of her son, who at one point pleaded with his mother to tell her story. And as revealed by the filmmakers, even her own daughter said that she knew maybe 5 percent of the totality that Freda unveiled.

I had been to the row house on Admiral’s Grove that Ringo grew up in. The two-up, two-down attached home had a “V” above the doorway. In the twilight of morning I breathlessly walked up the cobblestone street with a huge VHS video recorder balanced on my shoulder. I got no closer than the closed door and spoke in hushed whispers as if I had found Jesus’ last resting place.

Freda had been inside. Freda had been taken into the confidence of Ringo’s mother. Freda returned to this house and reminisced about the families that hovered and protected each Beatle.

Family plays a huge part in the legacy of the Beatles, and Freda was embraced and taken into the family’s confidences. George Harrison‘s father taught her to dance, Ringo’s mother pleaded with Epstein to give Freda a raise, John’s formidable aunt Mimi avoided anyone piercing the veil of her protective custody of Lennon, and Paul’s father took her into his heart.

But there’s more: There are people who will say that Freda was “passed around.” Her eyes lit up when asked if her relationship with the Beatles went further than that of employer/employee. With an impish grin and a laugh, Freda dismissed the question and made it clear that it was nobody’s business. “That’s a yes,” I silently mouthed, and for once I was appreciative of the class that this demur but forthright woman displayed. I got a feeling of her power, much like John Lennon did when he “sacked” her for hanging around the dressing room of the Moody Blues instead of the Beatles.

Freda looked at the other three and said, “Well, am I sacked by you, too?” Other times they would defer to the power that Lennon had over the band, but not this time. “No,” they answered softly in unison.

Lennon made a quick reversal and asked her to stay.

“Get on both knees and beg me,” she demanded.

“Can I get on just one knee Freda?”

And he did in a decision that would impact the future of society – for Freda had much to do with the Beatles success in the coming years.

I’m so glad Freda relented and told her story. Every box in her attic that she opened, most having not seen the light for over 40 years, held something priceless. It was more treasure than time capsule. We were able to look over her shoulder as she leafed through the pages of history. Some brought laughter, and some brought tears.

At the end of “Good Ol’ Freda,”Ringo makes an appearance and professes his love for this woman. I love her, too. I should have wrapped my iPhone in Kleenex. I wiped my eyes with an empty bag of popcorn at the end of the movie. Don’t miss this.

Winner of the Los Angeles Press Club's best blog award and a Southern California Journalism Award for his HollyBlogs, as well as an award for the Facebook group that helped to muscle the salvation of long-term care for the motion picture and television industry, Stellar's "vituperative blog on TheWrap" (Vanity Fair) focuses on issues related to the motion picture and entertainment industry. Stellar is founder of The Man/Kind Project, Inc., a 501(c)(3) corporation whose mission is to fight religious and cultural intolerance through the arts while building bridges of tolerance for all people. Stellar lives in Woodland Hills, California, with his wife of over 30 years, Nuala, and much too much Beatles memorabilia.
x