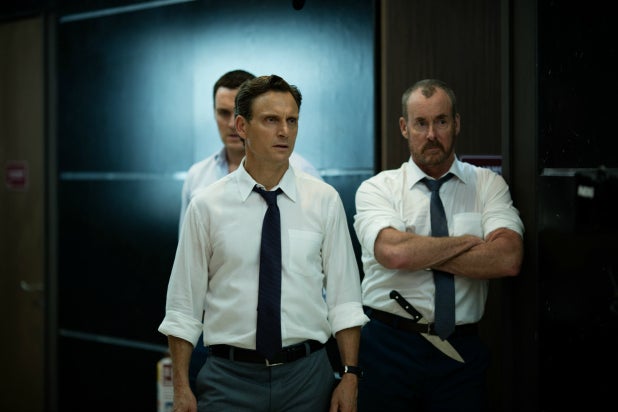 It’s a bad day at the office for the characters in “The Belko Experiment,” a nasty piece of work that ignites a spark of gruesome curiosity about human behavior before extinguishing it with the usual mindless butchery.

In 1961, social scientist Stanley Milgram famously revealed to the world that with a little instruction and a lot of authority, ordinary people could be made to do the darkest things to their fellow human beings. In 2017, director Greg McLean (“Wolf Creek”) and screenwriter James Gunn (“Guardians of the Galaxy”) show that, with only a little creativity and a lot of carnage, movies can be their own unthinkingly brutal assault.

Milgram’s experiment, in which subjects believed they were directly administering damaging electric shocks to unseen patients, under orders from a figure in a lab coat, spurred Gunn to write a screenplay that considerably ups the ante on “what would you do” constructs. The setting is a supposedly normal workday for the employees of the Belko Corporation, housed in an imposing high-rise situated in the desolate outskirts of Bogota, Colombia (where the movie was also filmed).

Disrupting the day’s tempo, however, is a voice over the building-wide intercom demanding a grim task of the company’s 80 employees: two of them must be killed within 30 minutes. While the staff muses on this presumed sick joke, steel doors slam shut over all the windows and doors, locking everyone in.

After 30 minutes, four employees’ heads detonate, and a suddenly terrified workforce realizes that those tiny metal balls Belko’s transplanted hirees were required to have implanted — the Colombian nationals were sent home that day — aren’t just tracers for their protection, and that their new unseen overlord isn’t kidding about the “Lord of the Flies” scenario being inaugurated. The next edict: 30 must be killed in two hours, or 60 die.

As one might expect, factions develop, and warring ideologues emerge. Mike refuses to become homicidal just to survive, pulling in a like-minded group. But ex-military Belko COO Barry (Tony Goldwyn) quickly arms himself and a few others, and sets about cherry-picking subordinates for execution.

Milgram’s obedience tests may have been screenwriter Gunn’s high-toned inspiration, but the real prototype for the grisly game on display is “Battle Royale,” the cult Japanese book/manga/film about high schoolers forced to slaughter each other by a tyrannical government. If only “Belko” and its punch-in-or-punch-out scenario were half as enjoyable as its antecedents, though. The meager tension generated by characters discovering their survival instincts, and why you might not want to be next to them when they do, is quickly dissipated by the realization that, at a certain point, the movie is an assembly line of killing, and not a terribly exciting or entertaining one at that.

Gunn has worked well stirring up thrills and attitude before, in “Slither” and “Guardians.” But here his screenplay suffers the way his grossly venal “Super” did: starting with a kernel of provocation, then devolving into blunt, witless violence. It’s not exactly satirical news that the culture of big business is dog-eat-dog, but you’re more likely to wince at the cruelty in Billy Wilder’s “The Apartment” than at the body-count ethos here.

McLean, who’s earned his own admiration in fright circles for the bloody “Wolf Creek” movies, shows some initial comic flair for the desperation of the situation. But he’s no artisan of sustained black humor, and none too skilled at drawing out the suspense in a movie whose showdowns — and requisite gore — are predictable. Mass killing set to classical music isn’t so original, either.

The best thing about this broken copier of a movie is its cast, a tangy mix of oddballs, friendly faces, and jackhole typecasting. (McGinley in particular relishes his ability to unnerve.) Ironically, even this strong ensemble becomes another reason “Belko” is so dispiriting: everyone loses his or her personality when squared off in a fight to the death.

Gunn and McLean save their commentary on bad, bad social science for the end, a sequel-hinting close which is neither a tasty twist or a justifying tease for more of the same. We got the memo. If you need a fix of last-person-standing-in-a-skyscraper thrills, there’s always “Die Hard.”