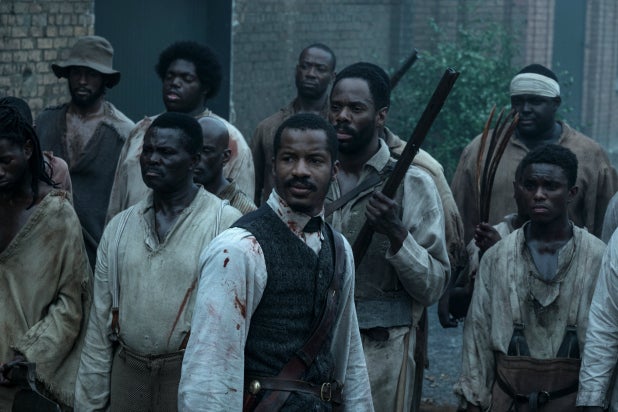 Nat Turner’s 1831 rebellion against the slave owners of Southampton County, Virginia, was a 48-hour insurrection in which dozens of white men, women and children were murdered. Those fiery two days provided an answer to a question few people at the time dared ask: What might slavery arouse in the enslaved?

Nate Parker’s dramatization of that brief, bloody insurrection, “The Birth of a Nation” — a passion project of the actor’s for years — premiered at Sundance earlier this year to the kind of thunderously positive response that felt like another question answered: What if a black filmmaker took the title of D.W. Griffith’s 1915 pioneering epic of lasting cinematic invention, and equally lasting corrosive racial imagery, and used it to show a black hero taking up arms to secure his people’s freedom?

Nat Turner, whose revolt ended with capture and a noose, is not just a patriotic emblem of retaliatory courage in writer-producer-director-star Parker’s telling. He’s also a religious martyr (pegged as a prophet by African ancestors in boyhood dreams), and an action hero, and a corrective to movie history.

See Video: Nate Parker 'Not Going to Apologize' for Being 'Falsely Accused' of Rape

That’s a mighty weight to hang on a long-hidden rebel’s shoulders, and it ultimately keeps this vigorously rendered film from full-on historical saga re-“Birth.” But while the attention given Parker’s college sexual assault charge (of which a jury cleared him), and his controversial responses to it, are likely to continue coloring discussions of the movie’s merits, it should be noted that “Birth” is an imperfect but laudable debut for a first-time filmmaker.

Parker chronicles his subject’s life from childhood, when a slave boy (Tony Espinosa) might have the kind of matriarch (Penelope Ann Miller) who teaches him to read, but only the Bible. As an adult, Nat (Parker) shows a shrewd watchfulness — he convinces his master (Armie Hammer) to buy a distraught slave named Cherry (Aja Naomi King) as a gambit to save her from lascivious buyers — and exhibits an affinity for sermonizing. An oily reverend (Mark Boone Jr.) decides Nat’s pulpit skills could be put to use preaching a gospel of subservience to restless slaves, but his “tour” of surrounding plantations, and what he sees there, only serves to stoke a fire for freedom in his own belly.

The filmmaking has a certain paint-by-numbers frankness that works in some ways, not in others. Parker collaborates well with gifted cinematographer Eliot Davis (“Out of Sight”) in capturing the sleepy menace of plantation life. They find suggestive uses of sunlight (through the slats of a shack, for instance, as it caresses the faces of preacher Turner’s enslaved congregants) and moonlight (the blue cover of night like an incipient awakening) to deepen what’s at stake.

There are also what appear to be shot-reference jabs at some of Griffith’s more poisonously iconic images. The black man emerging from the woods, for instance, which in the silent film was a white man playing “darkie” as a threat to white women, is now an emboldened holy avenger, a real-life African-American, played by one. It’s the kind of cinematic “answer song” that boasts an undeniable reclamation power.

Parker’s acting is perhaps the movie’s best asset. He calibrates Turner’s road from day-to-day prisoner to scripture-armored warrior almost entirely with a simultaneous hardening around the eyes, and a relaxing of everything else. Once his Turner realizes the Bible justifies violent rebellion as much it does the bondage under which he lives, the slave becomes a Confederacy-shackled Neo, stirred to the reality that the world could be vastly different if he stopped accepting its ignominies and took charge.

But overall, director Parker’s blunt worshipfulness — you know crucifixion imagery is imminent, but you might not have been expecting shots of angels — elicits a tonal obviousness that too often embraces the melodramatic. Everything is filtered through Parker’s vision of Turner as the one to keep our eyes on, for his conversion from whipped property to axe-wielding free man. But it means depicted atrocities — a force-fed slave’s teeth getting knocked out, two off-screen rapes — feel like checklist triggers.

Our expected disgust mixes uneasily with the movie’s reliance on revolution-fueled adrenaline, creating a nagging sense that the final-act rebellion and its cathartic violence is being pre-engineered for audience acceptance. (That we don’t see slaughtered children tips the movie’s hand.)

And while the actors around Parker do fine jobs, they fill roles rather than illuminate a moment in history. Jackie Earle Haley‘s dastardly slavecatcher, a figure who spans decades in the narrative, comes across more like the beady-eyed villain of a thousand good-vs.-evil yarns than an era-specific embodiment of an inhumane time. In your head, you think, “There’s the other half of the inevitable showdown.”

The classic action-climax language may be enough for those who want a cinematic uprising that resembles the mythic crescendos of “Braveheart,” Parker’s acknowledged favorite film. Watching “Birth,” you know you’re seeing exactly what its creator wanted to make, even if everything doesn’t quite work. A slow pullback to reveal black bodies hung from willow trees is horrific enough without the calculated add-on of Nina Simone singing “Strange Fruit.”

But whether in assessing this movie you choose to judge Parker, the flawed but talented messenger, or his flawed but interesting work, “The Birth of a Nation” and its burning vitality still stand as an achievement for black filmmakers telling their history their way.