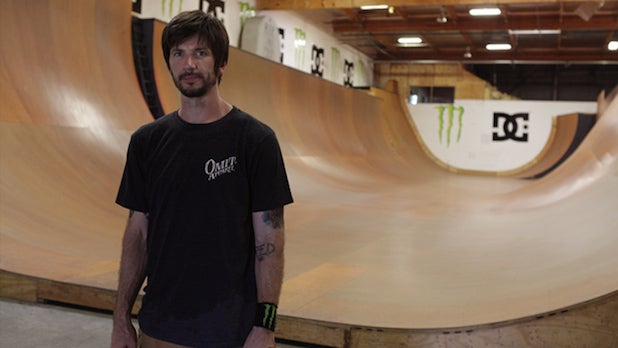 Director Adam Bhala Lough is offering the skating community a unique opportunity as part of the Indiegogo campaign for his documentary “The Motivation 2.0” — the chance to have their own skate tricks featured on a Jumbotron in Times Square.

“The Motivation 2.0” is a biographical documentary that will follow legendary skater Chris Cole from his humble beginnings to the top of pro skating.

The film is a sequel to his 2012 documentary “The Motivation,” which premiered at the Tribeca Film Festival and was the most popular documentary on iTunes for two straight weeks upon its release. Steve Berra executive produced the documentary with Ethan Higbee of Rain Dominion.

The sequel is being mounted by the same core group behind the first movie, and they’re using Indiegogo to launch a crowdfunding campaign replete with fun prizes and related swag.

In exchange for Indiegogo donations, fans will receive discounted movie tickets and GoPro cameras (one of Cole’s sponsors) that will allow them to make their own DIY skate films. In addition, Team 2.0 will be offering fans a chance to appear on The Berrics, have their best tricks inserted into the actual film, and for only $20, get their tricks featured on a Jumbotron in Times Square.

“For a solid year our best fans asked for this film, and now we’re delivering it. More importantly, we are giving every single one of them a chance to be a part of the making of it. This is a new type of filmmaking that’s really inspiring and exciting to me,” said Lough.

“All the skaters who support what I do and appreciate my skating are truly the life source of this whole project. This film is for them. I’m just a skate rat who grew up able to live his dream. The skaters get that, and my fans are the best fans anyone has. It’s them who make this film special. They’re gonna be the ones to understand it best, and hopefully it inspires them to live their dreams too,” added Cole.

The “Motivation 2.0” crew is also mobilizing on social media using the hashtag #RealAmericanSkater to unite skate fans across the globe.

Lough is the Indie Spirit Award-nominated filmmaker behind the Mark Webber film “Bomb the System,” the Nick Cannon-Paul Dano drama “Weapons” and the Lil’ Wayne documentary “The Carter.”