Following the hidebound, Oscar-friendly stodginess of “The King’s Speech” and “Les Misérables,” director Tom Hooper shakes things up a bit with “The Danish Girl,” proving that he’s capable of making a movie that’s both steeped in awards-season prestige and in possession of a pulse.

Arriving at an interesting moment in pop culture’s representations of the transgender movement, “The Danish Girl” offers a lush and somewhat stodgy aesthetic that will nonetheless reach an audience who could benefit from it; grandparental types who would never watch “Transparent,” “Orange Is the New Black,” “I Am Jazz” or even “I Am Cait” might find themselves settling in for a Sunday matinee and coming out having learned something about gender identity.

Not that “The Danish Girl” wears its messaging like a shroud; at its heart, it’s a portrait of a marriage, one in which the husband comes to understand that he’s really been a woman all along, and in which the wife’s responses are more complicated that an outside observer might imagine.

In 1926 Copenhagen, Gerda Wegener (Alicia Vikander) is a portraitist living in the shadow of her much more successful husband, landscape artist Einar (Eddie Redmayne). The two adore each other and are trying to have a baby, and they own one of the most adorable dogs in the history of cinema.

When their prima ballerina pal Oola (Amber Heard) blows off a portrait sitting, Gerda asks Einar to slip on some stockings and high-heel shoes so she can do some work on the painting in the subject’s absence. Holding Oola’s dress on top of himself and wearing the hosiery, something begins to click inside of Einar; when Oola shows up late with a bouquet of flowers, she laughingly dubs Einar’s female identity “Lili.” 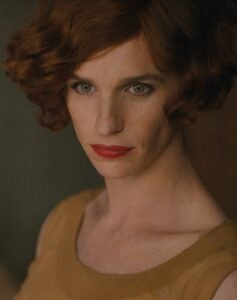 Einar starts wearing Gerda’s underthings beneath his suits, and his cross-dressing becomes a naughty turn-on for the couple. It isn’t until Einar attends a ball in full Lili drag — and attracts the amorous attentions of Henrik (Ben Whishaw) — that he begins to acknowledge that Lili isn’t a mere construct, but rather a part of his own personality. A part, in fact, that slowly comes to represent the whole.

Gerda is taken aback by Lili’s emergence, but in the screenplay by Lucinda Coxon (adapting David Ebershoff’s fact-inspired novel), her response is layered. For one thing, Gerda mentions that the first time she kissed Einar, “It was like kissing myself,” acknowledging that part of her attraction to her husband was an attraction to Lili. On top of that, Gerda’s paintings of Lili make her the toast of the Danish, and later French, art world.

Hooper’s stately storytelling style matches the material, since there are so many stages and intermediate steps involved in Einar fully becoming Lili, who goes so far as to undergo one of the very first gender-reassignment surgeries. And while the movie could have gotten more out of its supporting characters — there’s no doubt much more to know about Oola, Henrik and Einar’s boyhood friend Hans (Matthias Schoenaerts), who grew up to be a Paris art dealer — the delicate dance by which Einar becomes Lili and Gerda comes to love and accept this new person while mourning the loss of her husband remains fascinating all the same.

After all those wretched tight close-ups in “Les Misérables,” it’s a relief that Hooper and his usual cinematographer, Danny Cohen, allow these characters, searching for a way through their own lives, to get lost in vast spaces like hospital corridors and city blocks of Danish row houses. (We also get some nicely painterly moments, like a ballet studio where tutus hang in the rafters like indoor clouds.) Cohen and Hooper also make it a point to shoot Redmayne like Josef von Sternberg filming Marlene Dietrich, finding the androgynous actor’s best angles and lighting him like a screen queen of yore.

Redmayne fully inhabits the character, and it’s interesting to watch an actor going through his processes as part of the work; Einar himself must learn to navigate the world as a woman, and when we see him duplicating a lady’s subtle hand gestures, or learning how to walk in her shoes, it provides a glimpse into what must have been Redmayne’s own preparation for the role. For her part, Vikander adds smoke and shading to a character who could have easily veered into being just one thing, or at least just one thing at a time; she juggles pride and anguish, affection and disappointment, and longing and empathy with great skill.

For all its period setting and opulence, “The Danish Girl” is less removed from our own era than you might think; the physical violence and medical ignorance that Lili faces over the course of her evolution remain in place today. And while this film should by no means be the last word on an under-explored subject in mainstream cinema, it makes an interesting guidepost toward bolder stories in the future.